Martyn Ford published a video announcement yesterday explaining that his much anticipated boxing match with Iranian Hulk (real name Sajad Gharibi) was cancelled. Gharibi’s presence at the bout was suspect from the very first face off when it was revealed he was considerably smaller than actor/bodybuilder Ford.

“This is a statement I didn’t want to have to realize but unfortunately April 30, my fight is going to be postponed.”

“The event is still on, it’s just my fight. The event will still go ahead and there are some great people and fights on.”

“Unfortunately mine won’t be one of them, for reasons out of my control. It doesn’t take a genius to figure them all out.”

“I don’t want to go down the route of talking about it; too much time and energy has been wasted.”

Ford is 39 and has been looking forward to jump starting his celebrity boxing career. He’s likely to face Hafthor Bjornsson in future. And unlike Gharibi’s physique, Thor’s might actually be able to match his.

Many onlookers asked if the reason for postponement was a disagreement about finances or if it’s something related to Gharibi. Ford was initially mum on the topic but then went on to explain:

“But unfortunately my fight will not be one of them due to reasons out of my control. It doesn’t take a genius to figure them all out, I don’t want to talk about it, too much time and energy has been wasted. I am still here and I am still training hard, but there will be a debut and there will be a fight. I am just not 100 per cent sure who or when and why?”

A clash between the two has been a hot topic as far back as 2019 when the two were matched at the Polish MMA promotion KSW. According to Gharibi, he wanted to do either bare knuckle or boxing – no MMA so the duel never materialized.

Further, Gharibi was in advanced talks with BKFC in late 2019 but due to the pandemic – and his unwillingness to send physical proof of his physique it got nixed.

The promotion’s founder and president David Feldman had a lot of faith in Gharibi. He was so sure that Gharibi would become a star in his promotion.

Sajad Gharibi has a number of pictures depicting an impressive and otherworldly physique. It’s become apparent that Gharibi’s physique is at the very least embellished. When the time came for him to show off his enormous muscles in real life, he fell short. And to this day he never appeared in public shirtless. Gharibi also boasted of a 30 lbs weight loss in lead up to Ford bout – the authenticity of the claim has been questioned. While boxing might require a lot more cardio, Gharibi’s alleged weight is a under a lot of scrutiny. In lead up to the clash, Ford even shaded Gharibi for catfishing claims. The original date for the clash was April 2nd, but following an undisclosed injury it was postponed for the 30th. And as of right now it’s off. 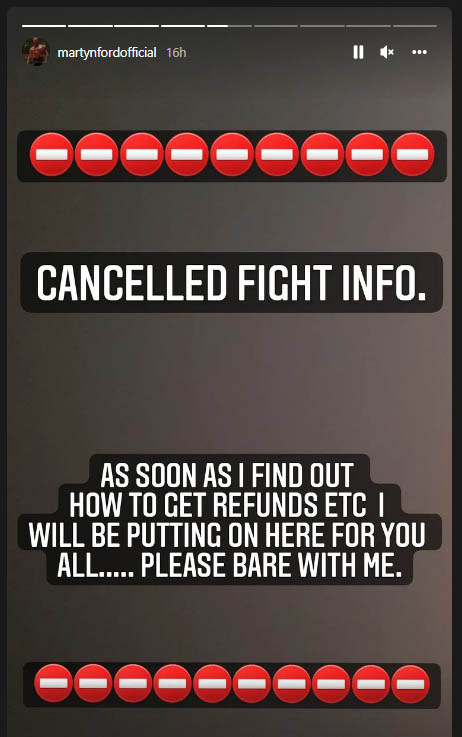