Iranian Hulk Sajad Gharibi may have shown his flaws during the promotional tour for Martyn Ford clash. In case you missed it  – Boxstar just pushed back the celebrity boxing event from April 2nd to April 30th following a reported training injury.

While (allegedly) 390lbs Iranian hulk preps for the anticipated clash – another old rival surfaced online and has been trying to revive the rivalry.

Brazilian Hulk is decidedly smaller – just 5’8″ compared to the Iranian’s 6’2″! But he still weighs in at 230 lbs and is eager to be taken seriously.

The rivalry dates back to 2019 when Romario do Santos Alves also known as Brazilian Hulk called out the Iranian saying: 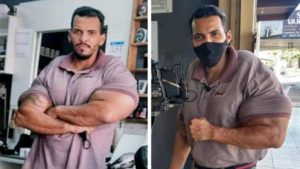 Iranian Hulk recently responded to him on social media saying:

“Be brave and invite me to fight instead of hiding behind your sponsors.”

“I am ready to fight you, show me what you’ve got to say in the ring.”

But first things first – the Iranian must face 39 year old bodybuilder Martyn Ford. Ford has been taking his training seriously and is a man mountain for lack of a better word. The two scuffled with Ford shoving Hulk during the face off and Hulk coming in for what looked like a takedown.

The face off drama was followed by press conference drama where Iranian Hulk once again resorted to dramatics. After all it was during the promo for the fight that it was pretty much confirmed Gharibi had been catfishing online as far back as 2015 – and was photoshopping his gains.

Considering it might be too late to back out now – Gharibi doubled down on his posturing and vowed to rip Ford’s head off (h/t Sunsport):

“That actor, or rather ‘joke’, disrespected me for the first time in 2018 on an Instagram Live.

“He needs to realise this fight is not a Hollywood production. There is no director. He will see and feel my deadly hook and deadly punch.”

“Martyn, continue to insult me. Keep playing the clown, but I promise you will be taken out on a stretcher!”