Martyn Ford is at the center of the much anticipated Boxstar event. Ford ,39, is to box the viral instagram sensation Iranian Hulk (Sajid Gharibi) during the main event of the evening.

However there’s been a huge change. Once it became apparent that Gharibi was struggling to find adequate coaches and was visibly distraught during the face off in Dubai – a change was bound to come. Ford just announced the said change explaining that Gharibi had been given an option to back out of the duel  – but he declined. Instead he would be given an extra month to prepare.

I can only apologize for any issues, please feel free to contact Boxstar if there is anything that’s causing issues and they assure me they will do all they can to help make this a smooth transition. On the bright side we have some huge announcements to make, and this extra few weeks gives extra time to make this a night to remember. The roof blowing off the o2 was not ideal, and a few behind the scenes issues to boot HOWEVER.. we move on, adapt and deliver .. see you there !!!! Head over to @boxstaruk now for tickets #boxstar”

Due to unforeseen circumstances and injuries with a few of the main card we have taken the decision to reschedule the event to April 30th.

Some huge additions to the rescheduled date will be announced tonight.

All tickets will remain valid for the new date.”

It’s unclear who was injured considering both Gharibi and Ford have been sharing work out videos.

The announcement was accompanied by a badly photoshopped picture of the two – no doubt struggling to find a usable promotional still of Gharibi. 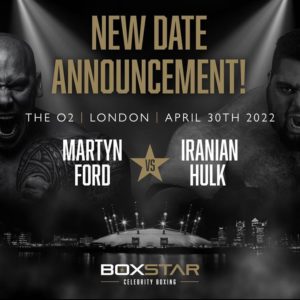 The promotion will also get a chance to redeem itself. While there was much buzz online about the pair up – the promotion featured hardly any materials. The whole thing appears to be co produced by Ford along with London Reel’s Brian Rose. Rose rose (sorry) to prominence when the pandemic first started – he had featured a series of highly questionable interviews with esoteric superstar David Icke on his channel. Rose then managed to pivot the attention he was getting into several lucrative deals for his own ‘Freedom’ media network – which was basically white labeling the services of others. Rose is also rumored to be making his debut on the card.