The upcoming UFC card will feature the Bantamweight champion Aljamain Sterling attempting his first title defense against the man he took the title from- Petr Yan.

Sterling faced Petr Yan for the first time at UFC 259. They started off even however, as rounds went by, it became evident that the Russian was beginning to dominate the bout.

Nonetheless, during the fourth round of the bout, Petr Yan ended his title run when he landed an illegal knee on a downed opponent. The knee landed solidly on Sterling’s head while he was on his knees. Under unified  MMA rules,  you cannot hit the opponent on the head with knees or kicks while he is considered “grounded”.

The doctors were called in to see if “Aljo” could continue fighting, but after the American dropped to the floor again, he was ruled unable to continue and the ending was announced – disqualification win for Sterling.

Many fans and athletes criticized Sterling for apparently “milking” the blow in order to win the belt. Sterling even joked about the complaints by pretending to receive an Oscar for “best actor”.

Sterling might’ve become the champion but he landed on the UFC’s bad side. Another man who was in a similar situation is Anthony Smith. If anything, Smith had even more right to claim the light heavyweight belt by way of disqualification due to the fact that Jones kneed him not once but twice while he was downed. Jones is another one of the athletes who is known for his cheating ways having utilized eye pokes to the utmost in the past. 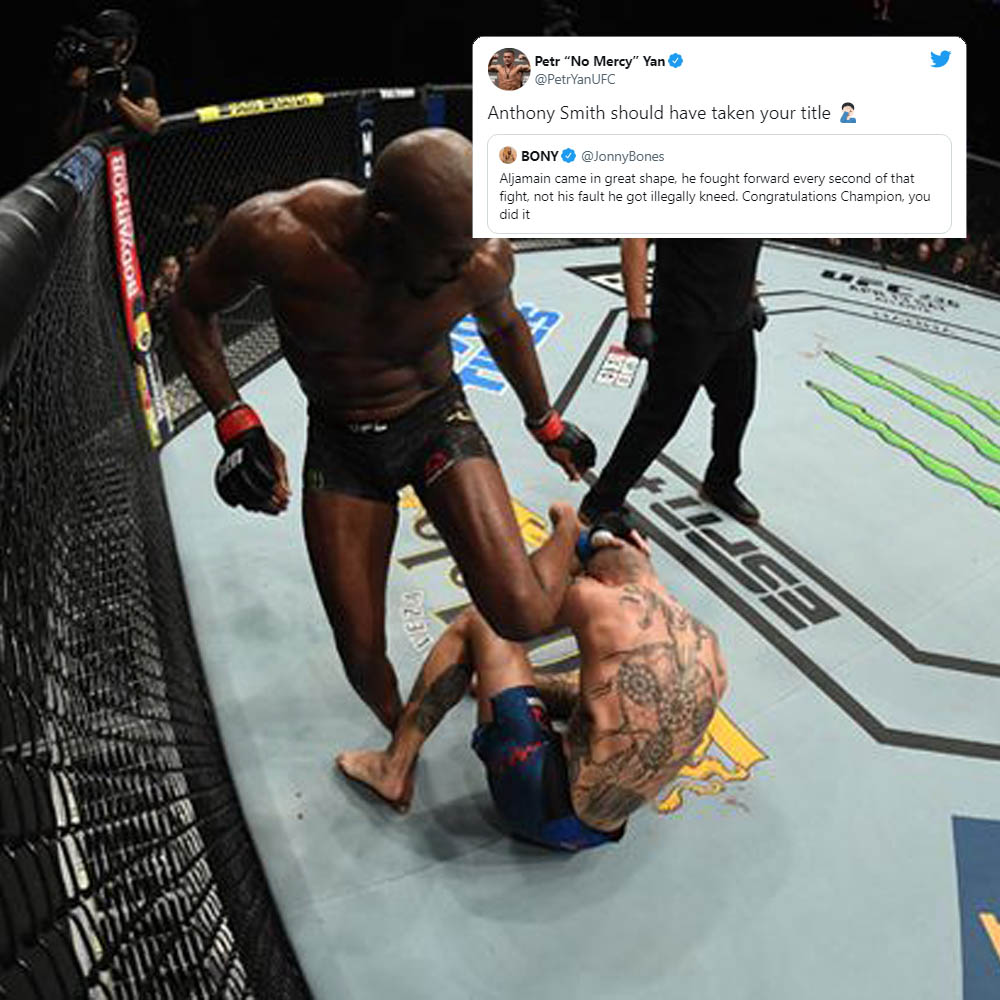 Jones never lost his belt to another athlete – but he did get stripped 3 times – after failing a doping test and violating the company’s code of conduct.

But Jones’ one career loss actually comes by way of DQ thanks to the fact he threw so called 12 to 6 elbows on an opponent down on the mat. But this is about a separate time he cheated.

Much like Petr Yan, Jones was dominating Smith throughout the event. However, in the later rounds, Jones used cheats to severely debilitate Smith.

Unlike Sterling, Smith refused to give up and accept the DQ win. During the doctor’s analysis, Smith clearly stated that he wanted to continue. It  continued and Jones was deducted two points for the severe foul.

In an episode of Michael Bisping’s podcast, Smith shared why he decided to continue.

“There was never a choice. I think that people think that I made this conscious decision to not do that. At the time, I had no idea that I would have been champion”

“It was never like, ‘Oh my god, I could be the champion’… What I didn’t want to do and what I’ve never been able to do in my entire career… I wasn’t willing to let Jon Jones know he hurt me, I would never have given him that moment, Never.”