Covington is a skilled fighter – he’s also adopted a sharp-mouthed MMA persona, but at a certain point we have to acknowledge Covington is playing dirty.

Covington is coming off of one of the best performances of his career. In his last fight, he dominantly beat his friend turned foe Jorge Masvidal in one of the most anticipated fights of the year.

The All-American wrestler really used his grappling skills to the max. During the MMA fight, Covington was able to out-wrestle Masvidal and completely wear him out with takedowns and ground strikes during the fight.

Masvidal later complained at the post-fight press conference about the fact that Colby was allegedly cheating during the fight.

“The eye poke was pretty bad man, the only thing that’s hurting on me right now is the f***ing eye poke, my eye is still throbbing right now.” Said Masvidal at the press conference.

” I’ve had a couple of mishaps with Herb Dean, I just don’t get why he didn’t fix the action. He threw a punch, missed, then immediately just jabbed me in the f***ing eyeball. I’m not going to take nothing away from him winning the fight because that was just one sequence, but it would have been cool if he would have stopped it there because he poked the s**t out of my eye.”

Weeks after the fight, Masvidal posted on Twitter a picture of a bruise in his eye, which he attributed to Covington’s eye poke.

Almost took eyes out but all good u cheating fuck see u soon pic.twitter.com/qeRpxQjwoU

Perhaps Masvidal had reason to complain. Looking back at the MMA bout, we found plenty of fouls made by Covington that, while they weren’t huge fight-altering fouls, there were enough there that we can at least criticize the referee for his lack of attention during the fight.

One of the most blatant fouls of the fight came at its very beginning. Colby threw a 1-2 combo that missed, but then he came back with an open right hand that connected right to Masvidal’s eye.

The unfortunate part for Jorge is that Colby used that foul to close the distance, clinch him against the fence and eventually take him down. That was the round Masvidal was supposed to be the freshest, which means that he missed out on a lot by that eye poke. 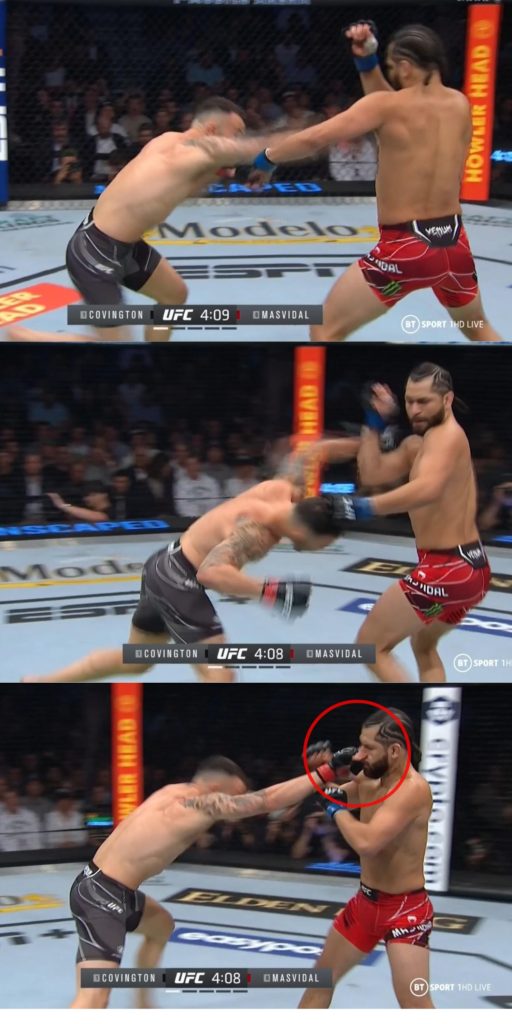 Round 1 – Fingers on the cage/punches to the back of the head.

After the eye poke, Colby was able to take Jorge Down and work on his smothering game plan.

On the ground, Colby was working to get to Jorge’s back, while constantly attempting chokes and punches. At one moment, Covington locked his feet fingers on the cage, making the already great base of the All-American wrestler even stronger.

Colby then used that position to repeatedly hit Jorge in the back of the head, for which he received a warning from Herb Dean. 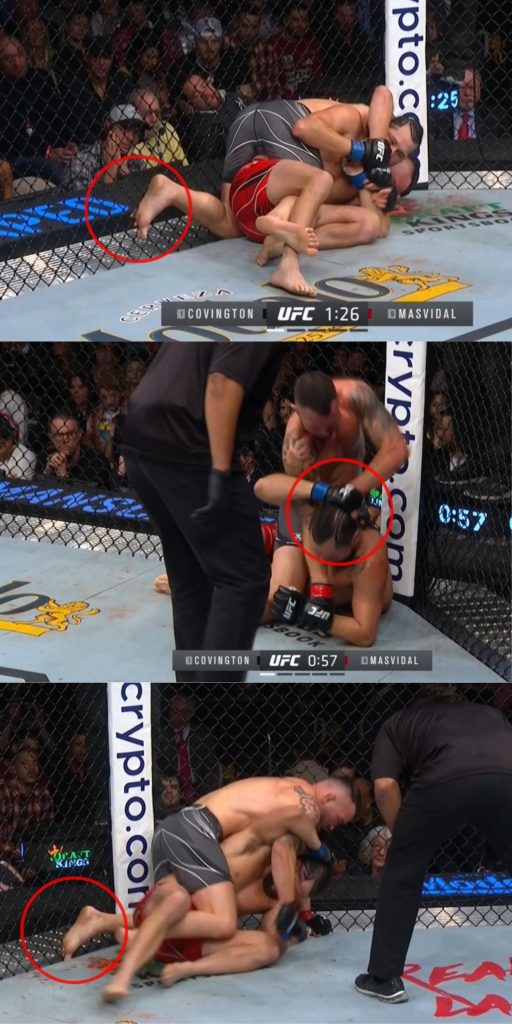 The low blow was the only foul that the referee Herb Dean issued a warning during the fight. Colby had Masvidal against the fence and then threw a nasty knee straight to Masvidal’s groin. Masvidal was allowed time to recover from the foul. 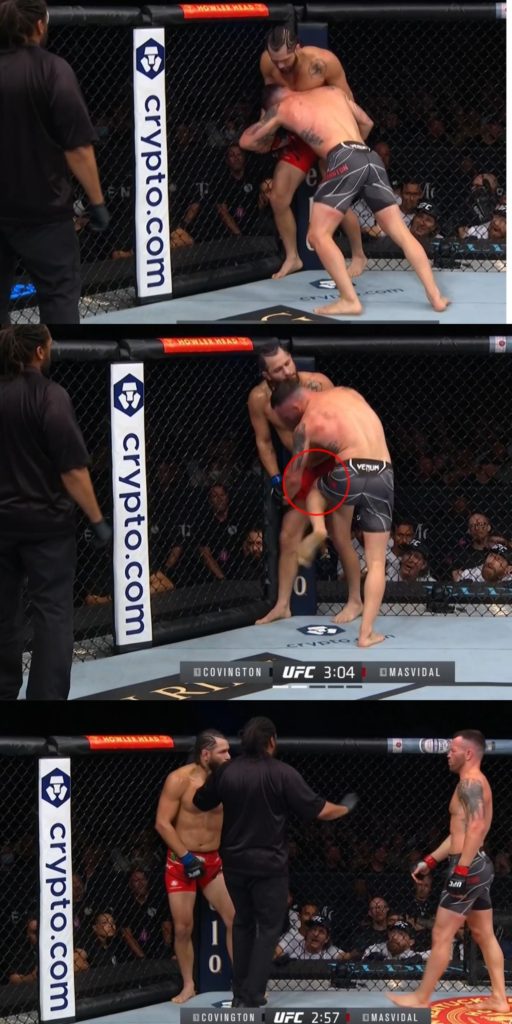 One of the most debatable fouls happened in the fourth round of the fight.

Covington was already way ahead in the scorecards after a dominant third round. The fourth was also going well for Colby, as he was able to keep Masvidal on the defensive for most of the round. Around 3 minutes into the round, Masvidal survives a flurry of punches from his opponent and attempts to get away from the fence.

Colby immediately clinches up with Jorge, and at the break of the clinch, Colby appears to hold on to Masvidal’s dreadlocks. 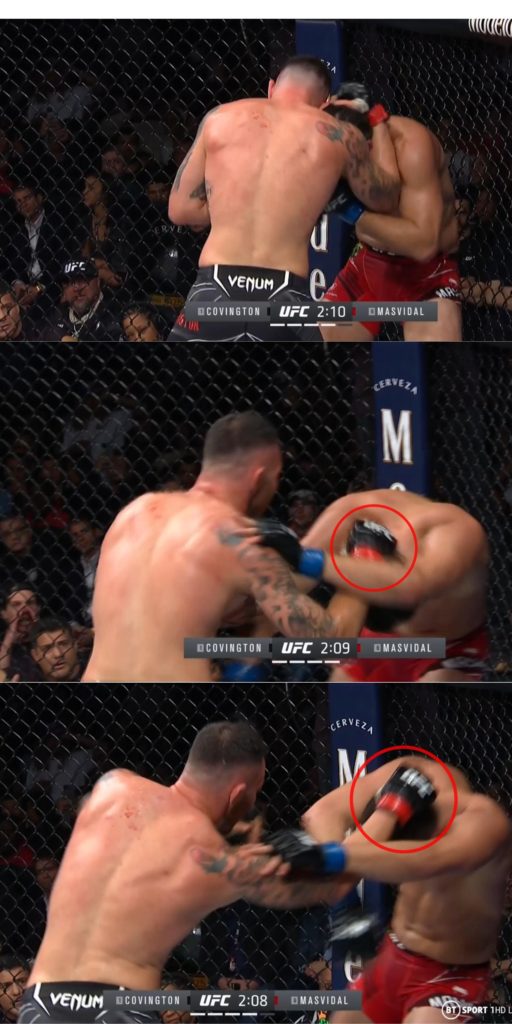 Right after the alleged hair pull, Masvidal was still working on the hard task that is getting Colby Covington away from you. 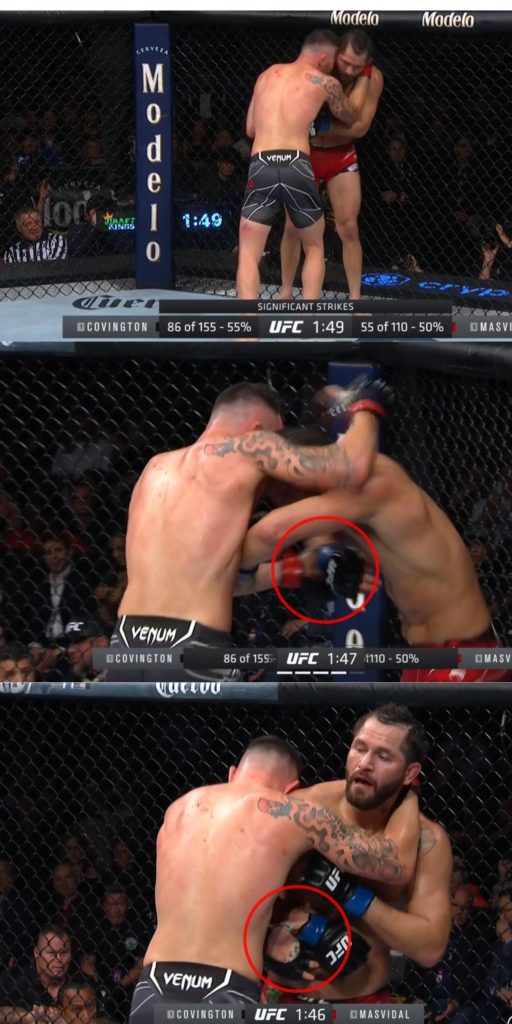 Perhaps Colby’s best round of the fight came at the very last one.

Masvidal was already visibly tired and couldn’t do much to get Covington away from him. The two spent most of the round on the ground with Colby attempting ground and pound and chokes from the back.

At one moment, while trying to get his arm under Masvidal’s chin to lock in the choke, Colby is seen slipping two fingers inside Masvidal’s mouth, to try and get him to react and move his head for the choke.

Under MMA rules, this is an illegal move and should have been granted at least a warning by the referee. These fouls shouldn’t take anything away from Colby’s performance, as he was clearly the better fighter that night. They’re still something that shouldn’t be glossed over – especially in light of Tim Elliott cheating accusations.

There are rumors swirling about a potential fight between Covington and  former teammate Dustin Poirier, but nothing official has been confirmed. Poirier better be ready because Covington has proven he’s ready willing and able to use every trick in the book.

You can also check out all the times Kamaru Usman bent the rules at UFC 278 here.