At UFC 280, Aljamain Sterling will defend his bantamweight title against previous champion TJ Dillashaw. However, after meeting Andrew Tate and finding a kindred spirit, he found himself in a different type of conflict beforehand.

Kickboxer and businessman Andrew Tate has garnered recognition recently for his unconventional beliefs and has been accused of sexism, domestic abuse, and other things.

However, Tate and his brother have been in the news in the days leading up to UFC 280 for meeting with a number of the competitors on the Abu Dhabi card and possibly attending the event. Along with Aljamain Sterling, they have also been seen with Sean O’Malley and Leon Edwards.

Aljamain Sterling had a meeting with Andrew Tate before UFC 280. However, that particular conversation had some unforeseen consequences. It started it by social media praise.

Sterling wrote: “Top G’s never die! Good chopping it up with you fellas 💪🏾”

Seeing Sterling and the Tate brothers together excited some people. However, not everyone was the same. Soon, comments from individuals denouncing the champ for Andrew Tate praise started popping up.

As a consequence, Sterling defended his connection with Tate. He claimed that the accusations had been disproven and urged people not to believe the widespread perception. 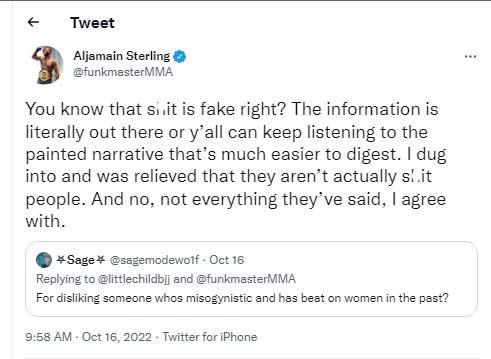 Tate was widely condemned for some physically abusive behavior he displayed on Big Brother some years aback. While he was in the house an adult video leaked online showing him whipping his ‘co-star’ but said ‘co-star’ since confirmed that the encounter was consensual.

There was also talk of producers fearing a physical altercation and this all played a part in him getting kicked out from the reality series.

But perhaps more troubling are Tate’s attitudes on women getting assaulted. 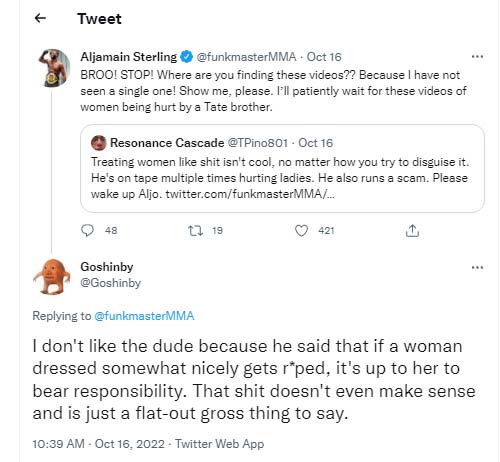 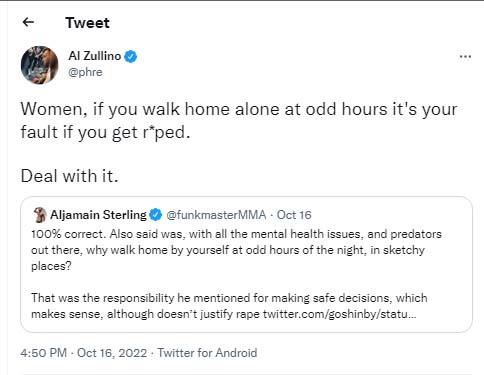 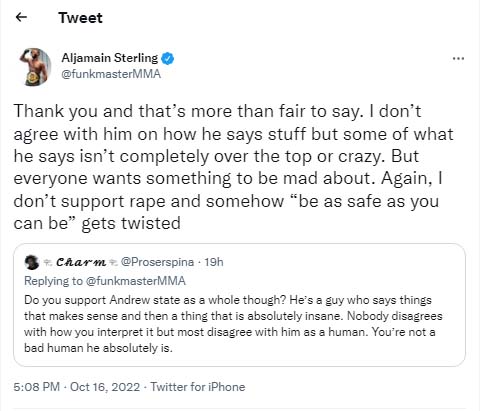 Clearly, this is a precarious situation, and it did not take long for things to spiral out of control when Aljamain Sterling stood up for Andrew Tate. The whole ordeal would last several hours, and the bantamweight champion would send out more than 50 tweets.

Aljamain Sterling has been accused of victim blaming for standing up for Andrew Tate. However, he insists that this is not the case and that the facts are being misrepresented and taken out of context. Fans nonetheless pointed out that he would have his hands full on Saturday night when he attempts to retain his title against TJ Dillashaw.