VanZant’s new tattoo featuring the phrases “Heart of a Warrior, Soul of a Lion” over her knuckles has been widely criticized by fans.

VanZant completed her UFC career with a 5-4 record after suffering repeated arm injuries throughout her career. She inked a lucrative four-fight deal with Bare Knuckle FC in 2020, reportedly for over $1 million.

Her bare-knuckle boxing career hasn’t gone as planned, with her losing her first two bouts. Aside from her fighting career, VanZant has a number of other opportunities, like owning her own fansite and recently joining with AEW to dabble in professional wrestling.

The former UFC strawweight, recently flaunted her new tattoo to her. In honor of her fighting career, she got the phrases “Heart of a Warrior, Soul of a Lion” inscribed over her knuckles.

Fans pointed out that Paige VanZant’s new tattoo’s text is supposed to be the other way around.

“Heart of a Warrior, Soul of a Lion. No one can ever deny how much heart I have in my fights,” she stated in the post.

“At times I’ll drop everything I have ever learned and fight with nothing but pride, which doesn’t always lead to the best outcome. This is a reminder to myself, I already have the heart and soul all I need to do is take care of the rest.” 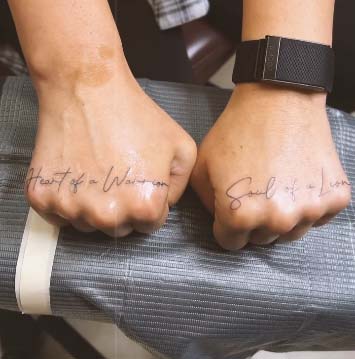 Her fans have criticized the tattoo in the comments, with one person remarking, “Isn’t the saying heart of lion and soul of warrior?”

“That’s the dumbest tattoo ever! He should be ashamed for putting that on you..”

She probably lost a bet and had to get a dumb tattoo.”

VanZant is anticipated to make her BKFC comeback during the promotion’s debut event on British soil, which will take place in London on July 9. Despite going 0-2 thus far, she indicated that she is approaching a contract renewal with the promotion.

“I’m still with BKFC. I’m about to sign a contract extension. Of course I didn’t have the greatest success right off the bat but that also fuelled my fire even more.”

“I’m training harder and I do see a lot of relationship between my training for BKFC and my training for pro wrestling – the great thing is there’s 24 hours in a day and I’m going to use every single hour of that to train for both.”