Thanks to Russian heritage, Khamzat Chimaev is often compared to UFC Hall of famer Khabib Nurmagomedov. While Chechenya (Chimaev’s republic of origin) is very different from Dagestan (Nurmagomedov’s republic of origin) the casual MMA fan is none the wiser. The Chechen vs Dagestan rivalry is one of the reasons why Chimaev had to change management early on – Ali Abdelaziz didn’t take too kindly to Chimaev insulting his superstar client Khabib Nurmagomedov and let Chimaev go.

Ahead of UFC 273, many people were comparing Khamzat Chimaev’s stellar rise in the UFC to the former lightweight champion Khabib Nurmagomedov.

The two share a lot of similarities. Both Khamzat and Khabib are proud Muslims, and both of them are from different republics of Russia, Chechnya, and Dagestan. Both are known for their incredible wrestling skills and heavy top pressure.

Up until Saturday, both of them had this aura of invincibility, due to the way they completely dominated their opponents in recent history.

Of course that changed after Chimaev’s last performance.  Chimaev reportedly let his ego get in the way and discarded his coaches plan.

In his UFC 273 main card fight against Gilbert Burns, Chimaev was more than tested, he nearly got knocked out in the second round of the bout.

Chimaev ended up earning the decision victory over Burns, but the fight was so close that many people thought the Brazilian should have emerged victorious.

This resulted in harsh criticism from fans expecting perfection. A lot of fans are now comparing Khabib’s UFC record against Chimaev.

The previously untouched Chimaev looked really banged-up after the fight. The war he had against Burns awarded him with several bruises and cuts, courtesy of the Brazilian welterweight.

By comparison, Nurmagomedov looked almost untouched after every single one of his 13 fights in the UFC. 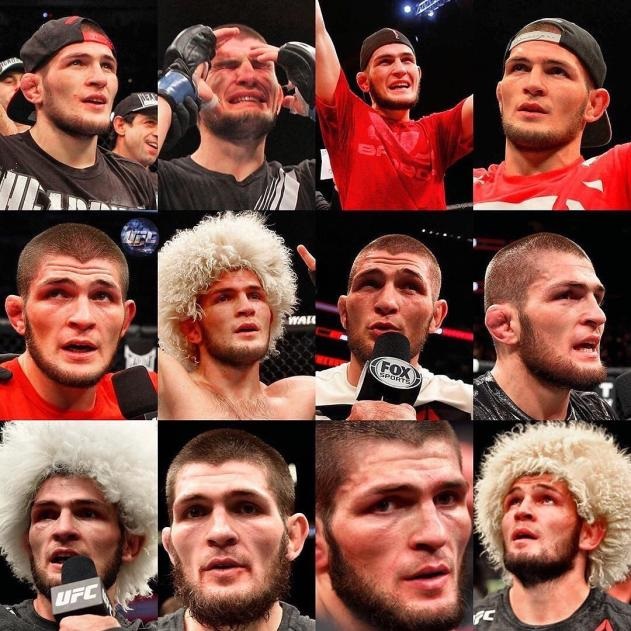 This is where we should note that the featured image in this article depicts Nurmagomedov after a particularly violent sparring session with Islam Makhachev ahead of the McGregor bout.

Khamzat’s team later defended themselves by saying that the nasty cut suffered by Chimaev during the fight was a reopened cut that he suffered three weeks earlier in training.

The amount (or lack thereof) of strikes absorbed by Chimaev in his UFC run was a big talking point in favor of the Chechen fighter before his UFC 273 appearance.

In his first four fights, he only absorbed 2 significant strikes from his opponents.

However, in the Gilbert fight alone, Khamzat Chimaev absorbed 192 strikes.

In comparison, Khabib Nurmagomedov absorbed 301 significant strikes throughout his 13-fight run in the UFC.

One thing Chimaev’s fans have going for them in this hype battle against Khabib is the fact that Khabib has also been in a very close fight against a Brazilian before.

In Khabib’s second fight in the UFC, he faced Gleison Tibau in a lightweight bout.

Tibau is perhaps the biggest opponent that Khabib ever faced in the octagon. The Brazilian was also a BJJ blackbelt and a State champion in wrestling, posing a very difficult problem for Khabib’s grappling-heavy style.

The legendary wrestling that Khabib got known for did not seem to work at all on Tibau. Tibau kept the bout very competitive by threatening Khabib with knees as the Russian got close while also stuffing several takedown attempts.

One of the biggest shots Khabib took in his career.

People don't talk about the knees Tibau landed on him throughout that fight #ufc pic.twitter.com/CzwbJhAOJI

Khabib ended up the unanimous decision win, but to this date, people contest the result of the fight arguing that Gleison Tibau should have emerged victorious.

One of the criticisms that Khabib faces is that he retired before facing the best his division had to offer.

During his UFC run, Khabib only faced two former champions, Conor McGregor and Rafael Dos Anjos (RDA  only won the belt after his fight against Khabib).

One other criticism is the fact that Khabib has barely faced a wrestler in the UFC. One of the few elite-level wrestlers that the Russian faced was Abel Trujillo in UFO 160. Nurmagomedov missed the weight limit for the fight.

Meanwhile, Khamzat will hardly go the same route at welterweight. The division has a lot of elite wrestlers and grapplers like Colby Covington, Kamaru Usman, and Gilbert Burns among many others.

Khamzat appears to have no choice but to face a strong wrestler now. The Chechen will have to face either the NCAA Division II wrestler Kamaru Usman, or the All-American wrestler Colby Covington