UFC veteran Daniel Cormier made a blunder and responded to fake news regarding his wife’s reaction to UFC’s former exotic dancer Vanessa Demopoulos jumping into the embrace of octagon interviewers.

‘MMA F Press’ is quite popular among UFC fans for hilarious satirical take on news from the sphere of mixed martial arts. The account was made for fun and recently mentioned the rising star Vanessa Demopoulos.

Vanessa Demopoulas has a unique habit where she would jump into the embrace of the announcer and hang there like a princess. The 33-year-old flyweight contender did this to Joe Rogan when she earned her first UFC win last January against Silvana Gomez Juarez. Demopoulos also did the same thing to Michael Bisping after she defeated Jinh Yu Frey at UFC Vegas 57 last weekend. 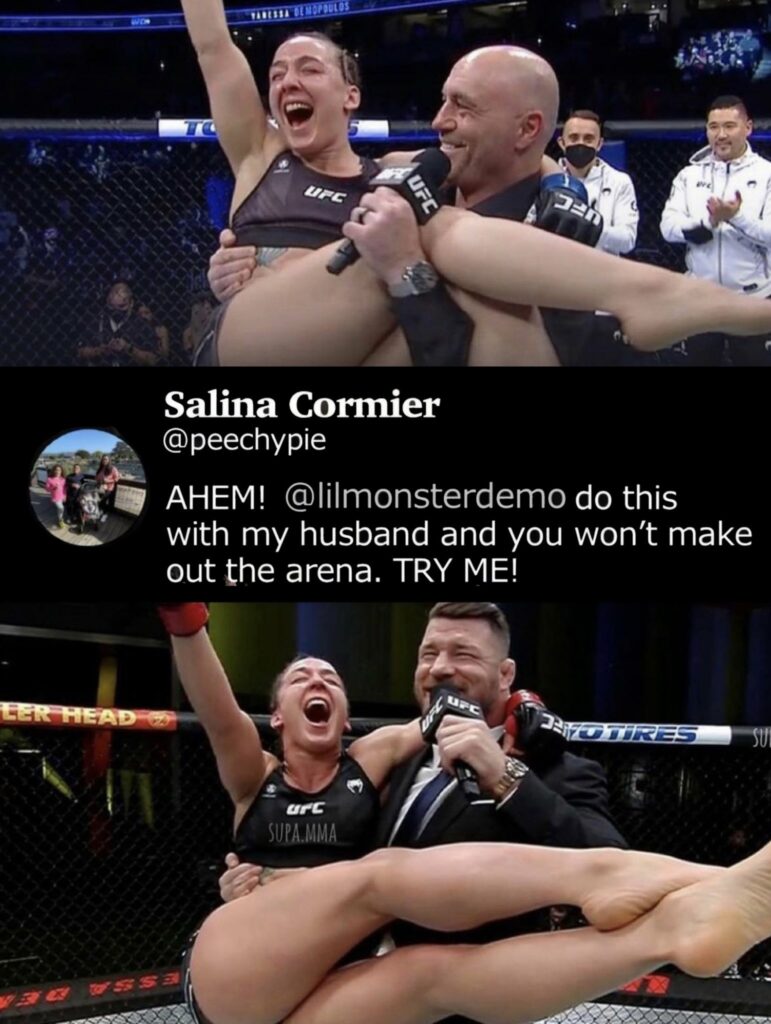 Her act surely caught many fans’ attention, including MMA F Press. Yesterday, they posted a screenshot of a fake tweet of Cormier’s wife. The tweet says his wife dares Demopoulos to do that to Cormier as ‘DC’ is one of UFC commentators.

“AHEM! [Vanessa Demopoulos] do this with my husband and you won’t make out in the arena. TRY ME!” The fake tweet reads.

While hilarious she didn’t say that at all. Some of y’all are so creative I don’t even know how they do that https://t.co/nxOkiKCLEz

Daniel Cormier didn’t know about MMA F Press and was being serious while clarifying the tweet.

“While hilarious she didn’t say that at all. Some of y’all are so creative I don’t even know how they do that.” Cormier wrote.

Soon after, the former two-division champion finally found out what MMA F Press is all about and hilariously laughed at the small incident.

While that was just fake news, it is surely not impossible for Vanessa Demopoulos to actually hug Cormier like she did to other commentators.

MMAF press also had a hilarious albeit a bit more R rated tweet regarding Dana White’s take on the situation.