Kai Asakura is a 28 year old Japanese mixed martial artist. Asakura has been in talks with the UFC recently – and is likely to announce that he joined the promotion soon.

Asakura formerly competed at Road FC, DEEP and was a champion at Rizin. Asakura competes at bantamweight and has a record consisting of 19 wins and 4 losses.

But aside from his lucrative career in MMA – he’s also a decently popular youtuber. He gained over half a million subscribers in under a year. This is likely thanks to his excellent sense of humor – as exhibited in the video he shared.

One of Asakura’s best videos is a prank where he confronts pedestrians who litter the streets of entertainment and red-light district in Shinjuku, Tokyo.

Asakura opted to raise awareness about littering – while dressed in a button up checkered shirt and a backpack. He completed the look with a bandana and fondly referred to is as ‘nerd’ style.

Asakura started off cleaning the street himself. He also said he thinks the experiment would be a good way to strengthen his character.

Asakura also has a brother in martial arts – his brother Mikuru was one of the proposed opponents for a Floyd Mayweather boxing exhibition. 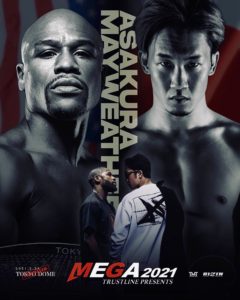