Paddy Pimblett quickly went from an NPC to a key player. In the fall out from Jiri Prozhaksa’s shoulder injury Pimblett was promoted to co-main event of upcoming PPV card set to happen next weekend.

On the same card – is an old foe of Pimblett’s Ilia Topuria.

Despite having competed in only three bouts since entering the company, Pimblett has established himself as one of the most well-known personalities on the UFC roster. The Liverpudlian will compete against Jared Gordon at UFC 282 in Las Vegas. This will mark his return to the octagon and his first time on a pay-per-view card.

A battle of words between Pimblett and Topuria got violent earlier this year in London. Toiletries were hurled, words were exchanged and the two were hauled away as the duo sought to settle their social media spat at a hotel. 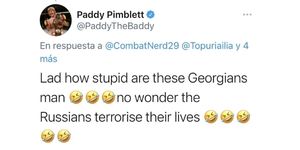 Topuria repaid him in kind by sharing a homophobic slur in Spanish.

Security had to step in to stop the situation from turning into a large commotion as bottles were thrown about the room and a table fell to the floor.

According to Topuria, when the two were on the verge of a direct encounter this week at the UFC’s Performance Institute, Pimblett had to be led in the other way.

“When I arrived at the PI this morning, I had to wait until they got paddy out the backdoor. I am no bully, you don’t have to avoid me. You already apologized. I still don’t like you. As long as you behave yourself when you see me, I won’t give a f*** about you.”

Before the close call, Pimblett had previously threatened to break his rival’s jaw in the event that they had another hotel encounter.

“I’ve got myself a house. I don’t need to stay in a hotel with those mushrooms, that hand sanitizer boy [Topuria] and that. If I see him lad, I’ll end up snapping his chin. So I’ll just stay away lad, won’t get with NSAC.”

Topuria will be in action on the UFC 282 card when he faces off against Bryce Mitchell. Despite Pimblett now competing at a weight 10lb higher than his competitor, a future match between the two in the octagon seems probable.

Quick to address the earlier incident, Pimblett gave his new adversary a new moniker that would further stoke tensions.

He said: “Hand sanitizer boy? That’s his name from now on, don’t refer to him as his name. I was standing there on my own and there was about six of them, he done nothing.”

“If he wanted to do something he would have come around the table and tried to have a fight with me, but he didn’t because he knows what’s good for him. As he got close to me, he swiped a slap at me. If you raise your hand to me, I’m gonna do something. So I bounced the hand sanitizer off his head.”“