One of the more interesting stories coming out of this weekend’s UFC Vegas 59 was the case of Stephanie Egger.

Egger was once a lauded Judo prospect in the organization and had claimed a bjj black belt. What many might not remember is that Egger was actually at ADCC 2017 and while she had finished without a medal she did accomplish one feat that very few have. She threw the massive ADCC record holder Gabi Garcia.

But those jiu jitsu accolades won’t take her far because Egger had reportedly tried fooling the ref and pretended that she hadn’t tapped once Mayra Bueno Silva caught her in an armbar.

Egger had been locked up and her arm even buckled when she decided to use her arm trapped to the cage – out of the referee’s view to perform the so called Brazilian tap.

Silva was a good sportsman and had released her arm immediately despite the practice in the UFC to not release submissions until the ref stops you that’s been in place for exactly this type of situation.

Oddly, it was also beyond the scope of the ever present cameras in the UFC octagon.

But referee Chris Tognoni utilized a rarely used technique here – “polling the judges”, where the referee consults with a cageside judge who has a better vantage point to determine what happened.

“Polling the judges” is rarely used in MMA but is on the rulebooks for instances exactly like this. This is one of the rules that was discussed during the last CSAC meeting.

Polling the judges is one those very useful tools at a referee's disposal in tricky situations like this. We learned about that at ABC referee training #UFCVegas59

Despite that Egger has posted that she will be trying to overturn the result. 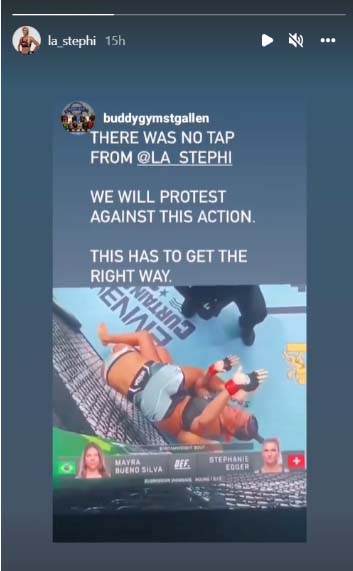 The record of Jon Jones is one of the best evidences of this. Jones’ sole defeat is a result of a DQ – and one Dana White believes should’ve been a no contest. There was briefly consideration of overturning this but nothing came of it.