Brendan Schaub has been having a hard time ever since his patron saint, Joe Rogan moved to Austin, Texas.

The new found distance made Schaub an easy mark for many comedians who think he’s skipped the line and is riding the coattails of his more famous – and established comedian friends.

Brendan Schaub is one of the rare few that somehow continuously manage to fail upwards. For Schaub journalism – or MMA analysis came after failing as a NFL player – and being publicly called out on failing as a UFC athlete by his famous friends.

One thing’s for sure, Schaub deserves praise for his perseverance and shamelessness.

While many have been shading Schaub to his face and behind his back, controversial comedian Joey Diaz recently went on a rant slamming his haters and making a dubious statement about comedy.

“a stupid joke for all the people that enjoy putting Brendan down and (making) stupid jokes and saying he’s not funny. The people would do that had never done anything in their life. And have never faced adversity like this guy.”

“If I was Brendan Schaub with all the hate he’s gotten I would have quit by now but this motherf–ker kept going.Started thicc boy industries.”

“He’s always working and he keeps f–king swing and so for you motherf–ers that don’t think Brendan’s funny today? Yeah. Give him a couple of years. You’re gonna eat your f–ing words.”

“And the people that are putting him down are the people who’ve never done anything.”

“That’s right, nevermind, quit being a fighter. And then going into comedy one of the hardest f–king things you could do ever, ever. I mean, this kid did you see the video?”

Schaub recently released a 25 minute long comedy set on youtube. While he’s surrounded by comedians day in and out somehow none of them offered a critique prior to the video’s publication which led to plenty of public criticism.

And while Schaub might be struggling to launch his own channel after leaving Showtime – at least he still has his friends. Or something. The really interesting thing is that prior to this pep talk Diaz appeared to be insulted when a twitter troll compared him to Brendan. 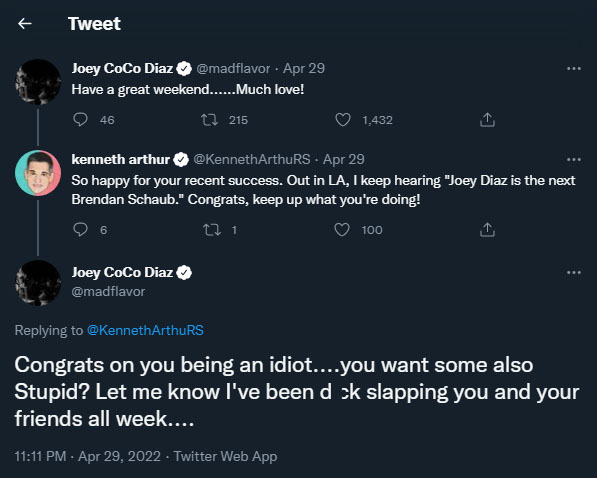