Paulo Costa has been benched by the UFC following his failure to make weight for a bout with Marvin Vettori. Costa came in very heavy and missed weight by almost 20 pounds.

At which point the UFC brass promised Vettori’s megamanager Ali Abdelaziz that Cost will be moving up a weight class and will no longer be allowed to battle at middleweight.

While he’s benched, Costa has been keeping busy on twitter and making new readers into a fans day by day. Costa has weighed in on a variety of topics and generally showcased good humor throughout. But good humor is the one thing former UFC heavyweight Brendan Schaub appears to be lacking. 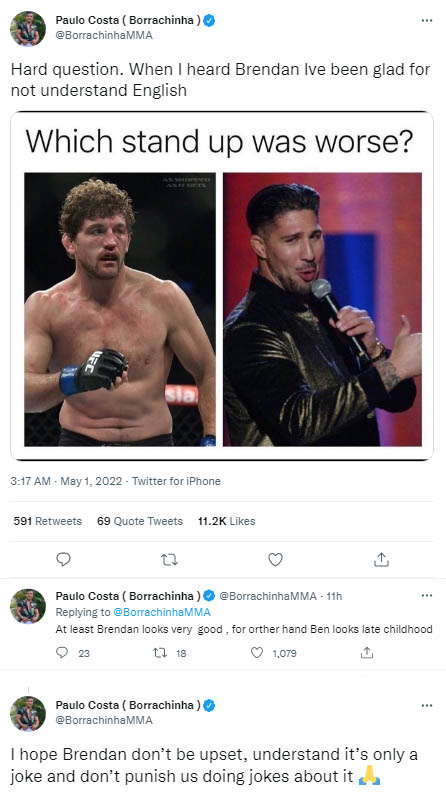 Costa is far from the only person to slam the ‘special’. In an attempt to promote the special Schaub went on Impaulsive with Logan Paul. There he got a bit bullied by the social media giant who seemed unwilling to give Brendan and his special the time of day.

And to make matters worse – Schaub’s special now has an imdb page that is flooded with very bad reviews.

One reviewer went on to call it “Unfortunate stuff. Who would post a YouTube video of themselves just saying mean things about their spouse and family? I was hoping it would be better but it’s pretty much in line with the inflated egos of comedian podcasters. The laugh track was a nice touch (it can also be found on YouTube).”

And for those who are vary of the Schaub hate club – the unbiased viewers don’t seem to like the special at all. Schaub’s previous special set the expectations at a historic low and yet somehow this new special failed to greet even that generous threshold. Here’s how MMA community rated it.

The reviews are in and the consensus is that Schaub's new special Gringo Papi is so bad it actually makes you feel bad to make fun of it https://t.co/SJOJXlbT2s

Sometimes I feel like a talentless hack, then I remember that Brendan Schaub exists and it could be so much worse https://t.co/O9WirDjC4Q

‘The Gringo Papi’ youtube video amassed 378k views since it was posted online 3 days ago. The like dislike ration for the 25 minute comedy set stands at 21k likes and 47k dislikes as of the writing of this article.

There are also about 6000 approved comments – many lauding Brendan for his comedic achievements.

Schaub was also caught stealing a joke Joe Rogan had made about his keto diet years ago.