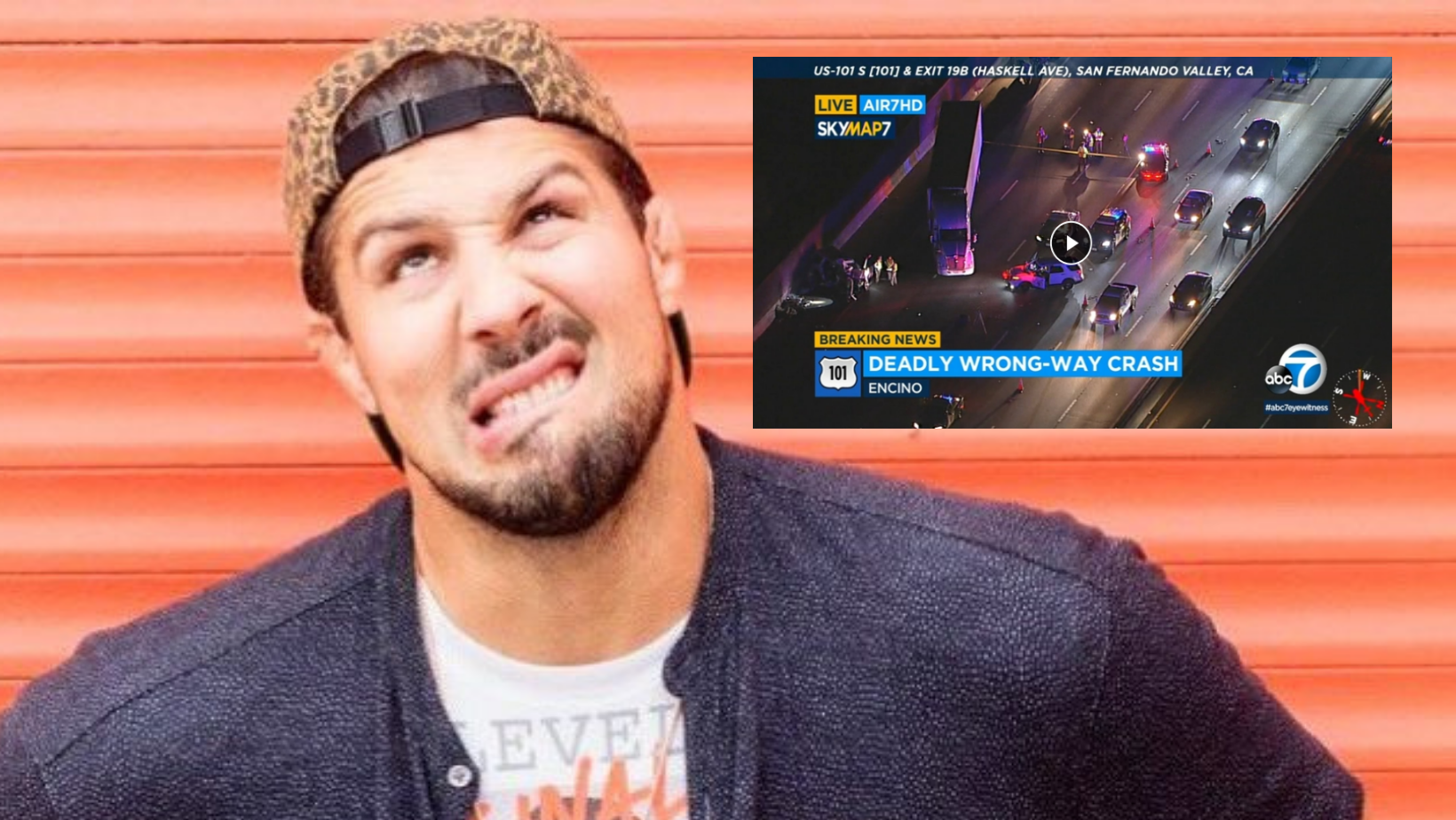 Brendan Schaub has had a big number of controversies attached to his name – all these instances have utterly destroyed his credibility for the viewers of his popular podcast The Fighter and the kid. Which is why there were quite a few questions raised once Schaub shared he had helped out victims of a car crash earlier this week.

The saga started when his wife shared the following update to story:

The update was receiving plenty of attention but the brunt of it would come once Schaub shared his account of what happened.

“On Thursday night, little date night, me and the wife were gonna meet our friends at Scopa so we’re driving to the West Side, we’re driving down there and we’re off the 101, right by Encino and my girl hoes holy sh*t babe slow down. I go what and she goes there’s an accident up hill. I look there and there’s an 18 wheeler .. ”

Schaub here launches into explaining how crooked the 18 wheeler was on the road. Both him and the wife are very stunned by the scene.

“We’re going around, and there’s a car just mangled. A six or seven year old (I know because I have kids), there’s like a six or seven year old on top of a car and he’s like (motions waving with his hands) this. Like this yelling for help. So I go babe that’s a f**king kid and she’s like just keep going. And I’m like it’s a kid and he’s pointing down and I look in and there’s two other kids in the car. So I pull up. There’s like debris everywhere. I pull up, I get out and I told my girl do not get out of the car. Stay here because my family is CHP (California highway patrol) and he says never pull over for an accident, it’s too dangerous. Never ever pull up for an accident. People get f***ed up all the time. But I thought because the 18 wheeler is blocking the lanes we had some protection. So I get out and am running towards the kids – I wasn’t close because I had to go past all the debris. Because the cars were hitting the debris and it was flying and stuff everywhere. So I pulled over pretty far up. So I’m running towards the mangled car and I see a guy with no shoes on in a white wife beater, kind of out of shape Mexican run across the 101. I’m like WTF. I’m looking and then a dodge going maybe 60 mph … WHACK! Hits him and I’m like what in the f*** is going on man? … So I’m just thinking about the kids so I keep going and that 18 wheeler where the car hit it, it hit the gas tank so there’s a flow of gas as thick as this room flooding out. My shoes and my jeans are all covered in gas because I’m running so the gas is.. .I’m thinking this isn’t safe. That guy who got hit pops up, then crosses the other lanes. But as he pops up he looks at me and has this crazy look in his eyes and I’m like what in the f*** is up with that man. I get to the car, the car is all mangled and there’s one other guy whose on the scene – maybe it was the truck driver I’m not sure but me and him are the first on the scene and there’s two kids and there’s the .. There’s a bigger kid and he keeps going “I don’t wanna die, I don’t wanna die. ” I go you’re not gonna die buddy, you’re not gonna die. And I tell the guy back up, back up. So I grabbed the door and trying to… but it’s mangled from the crash… so it’s intertwined with the car. I try to pull it down and I can’t so we gotto smash this window, get them through the window. So I break the window – we break some of the window down. It was already broken from the crash – I’m not like f***ing captain America. So I’m pulling all the shattered glass and I take the kid through so the big kid, He’s like out of shape kid who kept going I don’t wanna die, I don’t wanna die and his little brother who is probably 2 and a half or 3 – I unbuckle him and I get him out of the car and I look at the other guy and I go hey is there anybody in the car and he goes I think there’s one other person in the front. So I’m grabbing the kid and I go  it’s alright bubba it’s alright and I look and in the front is a lady who passed away, brain matter everywhere, blood everywhere and the kid is going momma momma and I go bubba look at me. Look at me, look at me, don’t look over there. ”

Schaub is visibly upset as he recounts the events. His voice is shaky and he noticeably swallows hard on several occasions.

” ‘Cause he’s so young it would completely f*** them up. So I go look at me. Don’t look over there, look at me. I look at the guy and go, get a blanket – cover his mom. And a lady walks up, I don’t know where she came from and I go take these two kids and run that way. Run away from the car and she goes I think it’s better to go that way. I go don’t go that way because the mom’s there , they can’t see the mom. Go that way. And so I sprint back to my car. My girl’s freaking out, stuff like that so I get in the car and we’re going. I have blood on my shirt and stuff like that and so I was a little mad at myself for putting my girl in that situation and I have kids like what the f*** am I doing and so I was a little mad and then my father in law is CHP. I call him and tell him I’m – I was the first on the scene but I didn’t stick around ’cause it was so dangerous and hopefully I don’t get in trouble for it but if you need any witnesses I saw it all. He goes it’s ok, we’ll keep you posted and we’re gonna need your report.”

Brendan went on to share the details regarding the family’s gofundme – meant to finance the funeral for the mother of the boys.

But a handful of fans turned haters got involved. Some parts of the story seemed contrary to other reports. And the photo evidence itself didn’t confirm what he told. Here’s where it’s worth it to consider the following – yes Schaub looks pristine in the picture his wife shared but it’s very possible he had a shirt over the white shirt when he went to dinner. Considering how often he wears baseball and basketball jerseys this kind of thing seems very likely.

Additionally there’s plenty of news coverage regarding the incident. And it seems like Brendan did get plenty of details wrong – for one what the father was wearing and how he met his demise. Here’s where it’s worth to interject that these high stress situations, especially  those that are dangerous could distort memories. So it’s not really that much of a shock that he got some of it wrong.

Update: some might say this is the diciest for Schaub. CHP has also confirmed he gave a statement tonight pic.twitter.com/7A18SvELit

Brendan Schaub isn’t a good actor, or a good liar. He is known for embellishing and the brain farts he often produces unknowingly. But it’s highly doubtful he knowingly manufactured any of the key details in this case. In fact some of his claims were independently confirmed on twitter.

He did, he handed me the baby, the other 3 were out by the time I ran up. He and I stopped almost at the same time. His car was in front of mine

Hi, just saw your interview on TMZ, I was the women you handed the kids off to. Just wanted to thank you as well. It was such insane Situation to be apart of. ????

Local news reports corroborated several key details – the details Schaub alleged the PCH had given to him is all confirmed. There are pictures of a mangled car next to a heavy set truck. The part of the account that’s most questionable is about him having exchanged looks with the father who tried to assasinate his family. The father was apprehended later and he wasn’t showing signs of being hit by a dodge at 60 mph. In fact he was resisting arrest and was ultimately hog tied. 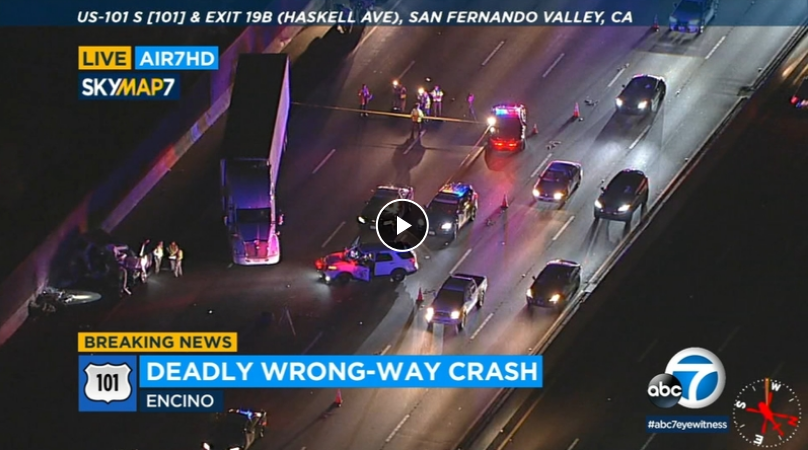 “The driver of the SUV exited the car after the crash and attempted to flee, though officers were able to detain the driver with the use of a Taser, according to the CHP. He was “combative” and “physically assaulted” officers, the agency stated.

That driver, later identified by the CHP as 31-year-old Cesar Iban Torres of Los Angeles, was transported to a local hospital for treatment after being taken into custody.” – one report reads.

The kids mother was in fact pronounced dead at the scene – she had to be machined out of the mangled vehicle.

Love him or hate him, it doesn’t seem like an appropriate story to go full conspiracy mode ON.