Iranian Hulk has become somewhat of a megastar thanks to his embellished image. Hulk aka Sajad Gharibi has been a fixture on social media for at least 5 years. The speculations that his images are digitally doctored has always been present but culminated following his face off against Martyn Ford in Dubai. The two are currently scheduled to box on April 30th as a part of the Boxstar celebrity boxing event.

Gharibi does not want to leave his homeland of Iran despite claims he wanted to move to the UK as a refugee. During a recent tv interview he revealed:
“Since 2016 I have had many job offers from Dubai in body guarding, especially when I was heavy as they offered me $20,000 a month – but I didn’t want to go,”

“Firstly I must die if I endanger Iran’s reputation, Iran is my life and blood. I was sick in Dubai because I was so far away from Iran. Iran is my love and life, I was born in Iran and will die here. I can’t think of living anywhere other than Iran. Some say ‘you want to immigrate to England and become a refugee’ but it doesn’t make any sense.”

It’s unclear what qualifications – if any he has. His outstanding alleged physique might be enough to secure a body guard gig but there are multiple reasons to side eye this claim. Average yearly pay in Europe is roughly $67,500. 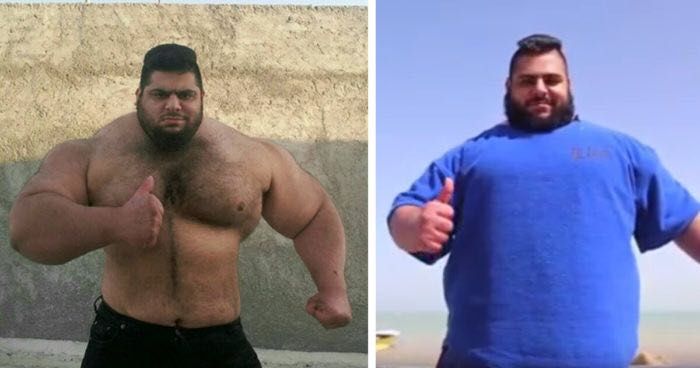 Gharibi is expected to travel to United Kingdom sometime close to the 30th of April when he has a boxing bout scheduled at the O2 arena. The card was previously scheduled for April 2nd and postponed due to undisclosed injuries.

The face off was held much closer to Gharibi – in Dubai in hopes of alleviating his concerns. At the face off things got contentious and as a result he claims his parents disowned him.

The face off wasn’t the final exchange he had with Ford he also offered to get physical right then and there during the press conference.

Many question if he will even show up considering that his physique appears diminished and many including his opponent speculate wasn’t even there to begin with. Bare Knuckle FC previously negotiated with him to make a debut there but the founder suspected Gharibi’s physique and never got physical evidence of it being otherwise.