Daniel Kinehan founded MTK Global – a Boxing promotion. But along with the promotion, he also had an MMA management company. While the Boxing arm of the promotion ceased to exist – pretty much as soon as Kinehan was charged and sanctioned the MMA branch was hoping to keep going.

The organization had managed some of the biggest names in combat sports.

Kinahan is known for allegedly running a worldwide scaled drug cartel. Recently, the Irish druglord was sanctioned by the American government. The sanction even offers a one million dollars reward for any clues about Kinahan’s whereabouts.

During the press conference of the upcoming bout between Tyson Fury against Dillian Whyte, the company issued the following statement:

“MTK Global to cease operations. As a business, we have faced unprecedented levels of unfair scrutiny and criticism since the sanctioning by the US Government of Daniel Joseph Kinahan. It is a matter of public record that Mr. Kinahan’s involvement in MTK ceased in 2017, and despite repeated reassurances in this regard, unfounded allegations about his ongoing association with us and our fighters persist.”

“Since leading promoters have now informed us that they will be severing all ties with MTK and will no longer work with our fighters, we have taken the difficult decision to cease operations at the end of this month. MTK prospered because we always put the long-term interests of our fighters at the heart of what we do. Our priority in the weeks ahead will be to ensure that our world-class boxers are supported to find new partnerships as swiftly as possible. MTK gyms are operated independently and will remain open for the foreseeable future. Further announcements will be made in due course. Thank you to all the fans who have supported us over the last decade.”

According to MMA journalist, Guilherme Cruz, this decision to stop operations was to only affect the boxing side of the company. But things were not so simple. MTK Global once had a huge MMA rooster that had UFC contenders Darren Till, Aleksandar Rakic along with Mounir Lazzez and others.

On their roster were:

And while initial reports confirmed that the management arm of the company had hoped to keep going – the athletes were greeted by a disturbing message the next day. 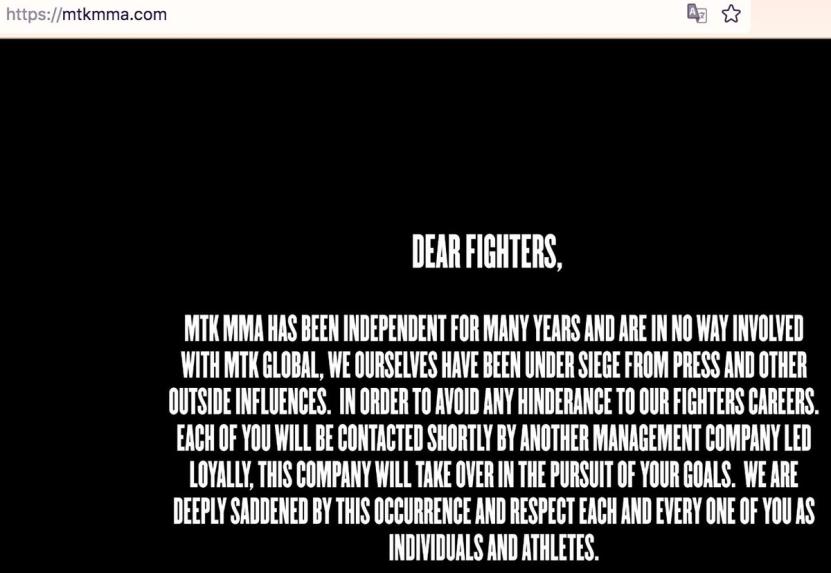 “Dear fighters, MTK MMA has been independent for many years and are in no way involved with MTK Global, we ourselves have been under siege from press and other outside influences. In order to avoid any hinderance to our fighters careers. Each of you will be contacted shortly by another management company led loyally, this company will take over in the pursuit of your goals. We are deeply saddened by this occurrence and respect each and every one of you as individuals and athletes.”