Darren Till has accidentally revealed the opponent he’s targeting for octagon return.

After Till’s recent interaction with fellow UFC middleweight Joaquin Buckley, fans were wondering if that was going to be his next opponent. However, that is not happening.

In a picture posted on his Instagram Till accidentally shared a text message.

In the message, a person by the name of “Gaffa” tells Darren Till that Hermansson has accepted something and that  Maynard  said that he can have the main event. The Maynard in question is Mick Maynard the UFC match maker.

“Hermanson has accepted – Maynard said you can have the main event no problem?” 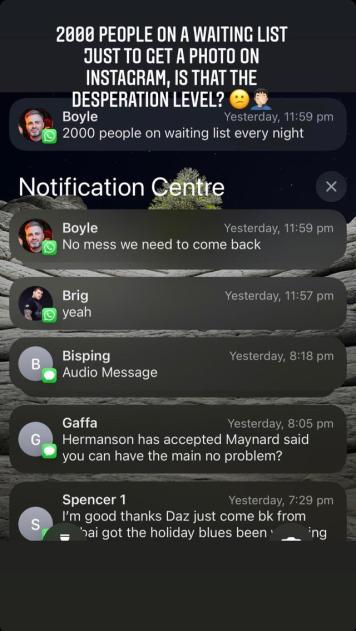 With a little investigative work, one can determine that Hermansson is in fact the UFC Middleweight Jack Hermansson and that the person named “Maynard” is Mick Maynard, the UFC’s matchmaker.

Hermansson is ranked at number 7, just above Till in the Middleweight division. With both athletes coming off of losses, a victory could mean a potential new title run for either one of the contenders.

Hermansson is fresh off of his UFC Vegas 47 main event loss to Sean Strickland.

Meanwhile, Till is in a tougher spot in his career. The British fighter lost 4 out of his last 5. But on the bright side the rumor has it UFC is targeting UFC 277 for London – so it would be a big homecoming for Till.

His last victory was in November of 2019 when he beat Kelvin Gastellum by split decision during UFC 244.

Hermansson could be a very good opponent for Till to get back in the winning column. If Darren is able to avoid takedowns, he has all the skills necessary to beat Hermansson in a striking contest.

Despite the consecutive losses, Daren is still a massive fan favorite in the sport. The Liverpool-born athlete has a lot of British fans. He recently became the center of attention for his friendship with the UFC superstar, Khamzat Chimaev.

UFC would certainly be interested to see a crowd fanfavorite headline a card in the UK. Recent event in London had record breaking turn out and an electric crowd. After the event White was thrilled with the results and gave a bonus to each and every finish on the card.