Leon Edwards is proof that good things come to those who wait. Edwards was losing on the scorecards of UFC 278 when he landed the winning headkick and knocked out Kamaru Usman on the spot.

Usman could be seen in the cage as he regained consciousness asking his coach what had happened.

After the terrifying knockout, Usman was transported straight to the hospital.

Chael Sonnen voiced some concerns about Edwards’ performance implying that Edwards had been bending the rules. This is especially hilarious considering the amount of infractions Usman had during their five round main event.

And despite the striking victory, Leon Edwards just reached another landmark on his martial arts journey. He was promoted to the rank of jiu-jitsu black belt.

Jiu-jitsu black belt is the highest rank that one can reach in jiu jitsu, after white, blue, purple and brown belts. It should be noted that there are coral and red belts but those are mainly just to note time spent at black belt level and to honor martial artists contribution to the art.

“That must be a bad thing. But it’s not because they see the growth and development and see what’s possible in the open somewhere else. They uncover a 14 year old kid that had nothing like Leon did or had nowhere to go or was in the wrong situation or the wrong crowd. And they can turn their life around and we can be, like, truly inspired, right?” 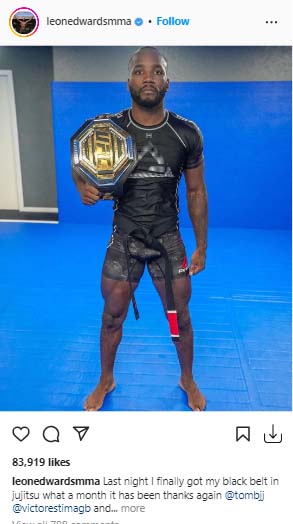 The stripes on Edwards’ belt are used to denote that he’s a teacher as well.

His instructor wrote:
“My brother Leon Edwards congratulations on your well deserved & earned black belt! A true embodiment of a great martial artist with a work ethic & determination like no other. Thank you for being a part of my journey & allowing me to be a part of yours a truly special moment as I hand out my first ever black belt on behalf of myself & professor Victor Estima from all of us a graciebarra congratulations Professor.”

Edwards was a purple belt back in 2019. He appears to be following typical bjj promotion schedules. Like many MMA oriented practitioners he too was unable to tie his own belt properly at that time. 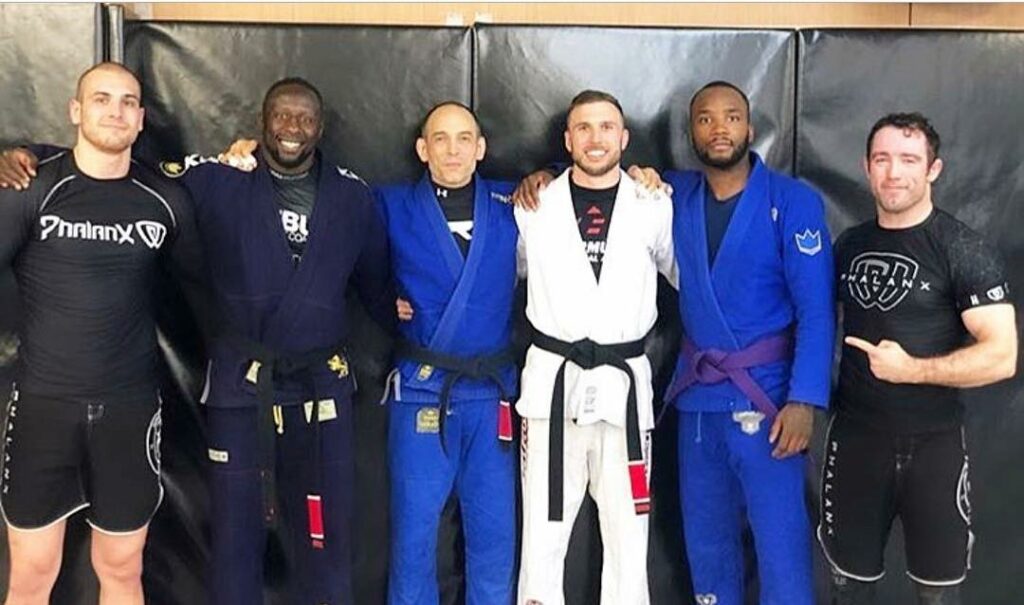 Edwards had made it a point to make it to his title bout without moving to the US – something unique to him considering that the only British champion prior was Michael Bisping who had moved to California.

As a reminder Leon said this after the finish:

“This has never been done before, to have a guy from Birmingham in the U.K., did it from the U.K,” Edwards told reporters at Vivint Arena in Salt Lake City. “I know Bisping did it first, but he did it from living in America. So it was hard for people like me to relate, to say, ‘Look, we can do it, as well.”

Bisping wasn’ t well liked during much of his UFC career but he’s come a long way since to become a fan favorite.