Sean Strickland is struggling to make a name for himself. In the last year Strickland became somewhat of a meme because he seems dedicated to talking about taboo topics.

Strickland failed to register on many issues – but recently he’s shined a light on disturbing cases of females in the UFC who are in romantic relationships with their much older MMA coaches.

Initially, Strickland went on Twitter to criticize UFC athlete Aspen Ladd, due to her “unusual” relationship with her coach Jim West. According to Sean, Jim West is an alleged abuser.

“The fact you started to train with him at what 12? 100 percent grooming.” Strickland wrote on his Twitter. “Tell me my facts are wrong and I’ll apologize now. @TheAspenLadd.”

Later during the same rant, Strickland commented on Rose’s relationship with Pat Barry, a former UFC heavyweight that now works as her coach.

According to Pat Barry himself, he met Rose Namajunas when he was 28 years old. Meanwhile, she was only 14 which means Pat Barry is 13 years older than Namajunas.

In a 2012 interview, Barry claimed he had been dating Rose for five years. Meaning that the couple started dating when Rose was around 15 years old.

Strickland has been talking about this a lot. Adding these gems recently: 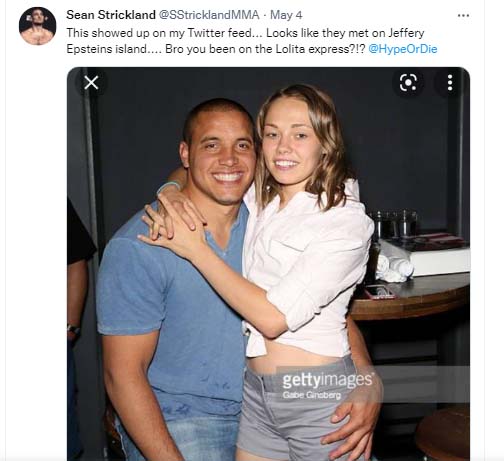 “Age really is just a number, Glover Teixeira didn’t let doubters put him down when he won the belt at 42. ‘Too old’ ‘washed up’ He went on to double down on his comments about Pat and Rose. Meanwhile Namajunas tried to answer these claims without directly addressing them.

“I ask for wisdom also for you know, certain distractions and people that like to say certain things,” Rose said during her prayer. “I pray that you give us all wisdom in response to dumb people, people that just say stupid things.”