West has been Aspen Ladd’s MMA coach for a number of years.  In a 2015 interview, 20 year old Ladd explained she had been training for 5 years – and that most of the athletes MMA Gold started with, were under age.

“I’ve been training for five years and I knew I wanted to fight from day one. I just had wait to get old enough. Turn 18”

“I was very, very fortunate and kind of fell in MMA gold. I, when they first started coming to Folsom MMA our gym, I met the head instructor Jim West. ”

“And then from there just progressed, we started to build a team. It started out as only a handful people. Most of us were under age at the time. ”

“Aspen started with us when she was 17.” 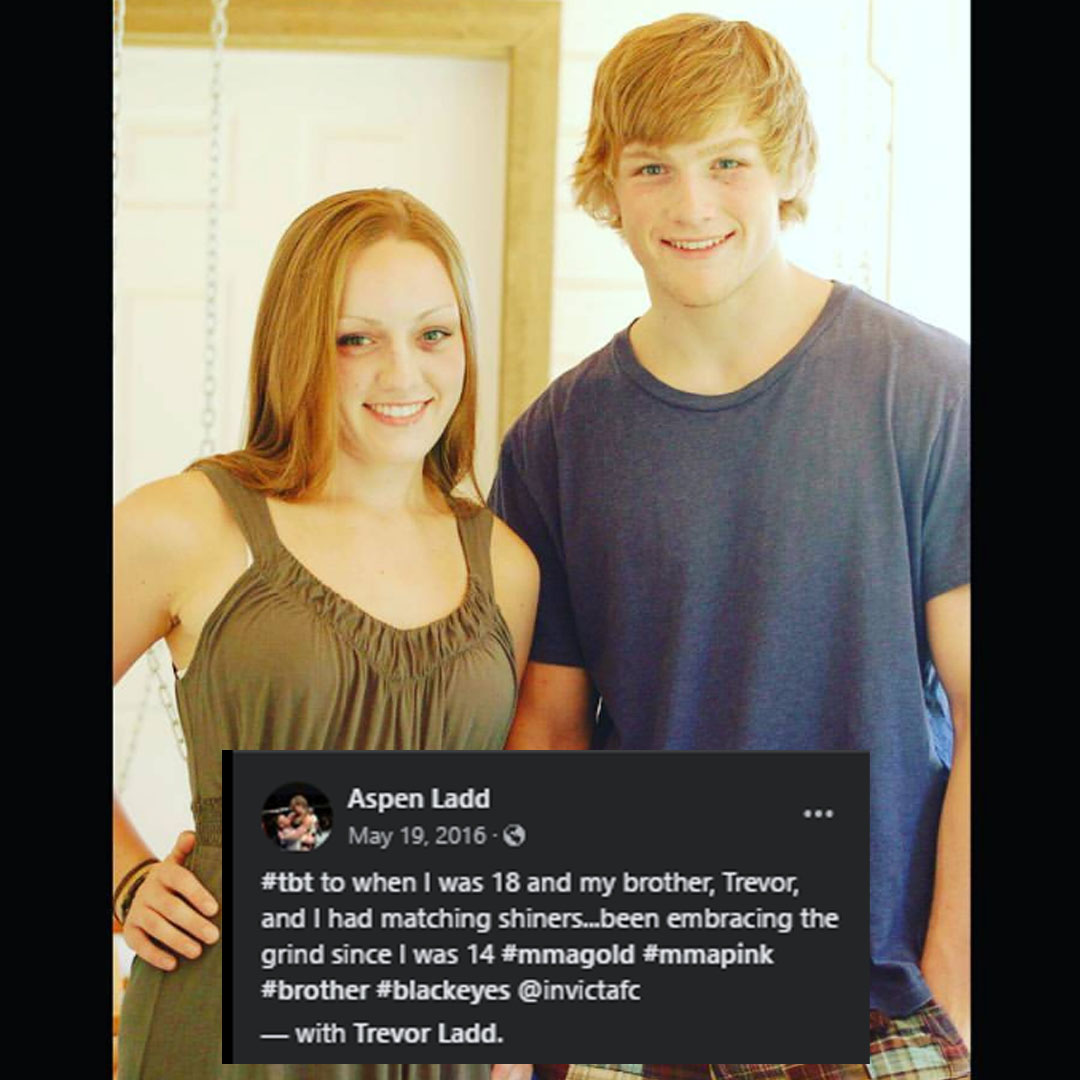 “She had trained a few years of ‘jits prior to joining us, but that’s it.”

“She is 100 percent built from the ground up to the world class levels we are all witnessing.”

This claim is countered by one of Jim West’s own social media posts – claiming that he’s worked with Ladd as far back as 2011. Aspen herself says she’s been training since age 15 – but she never clarified at which point she met West. 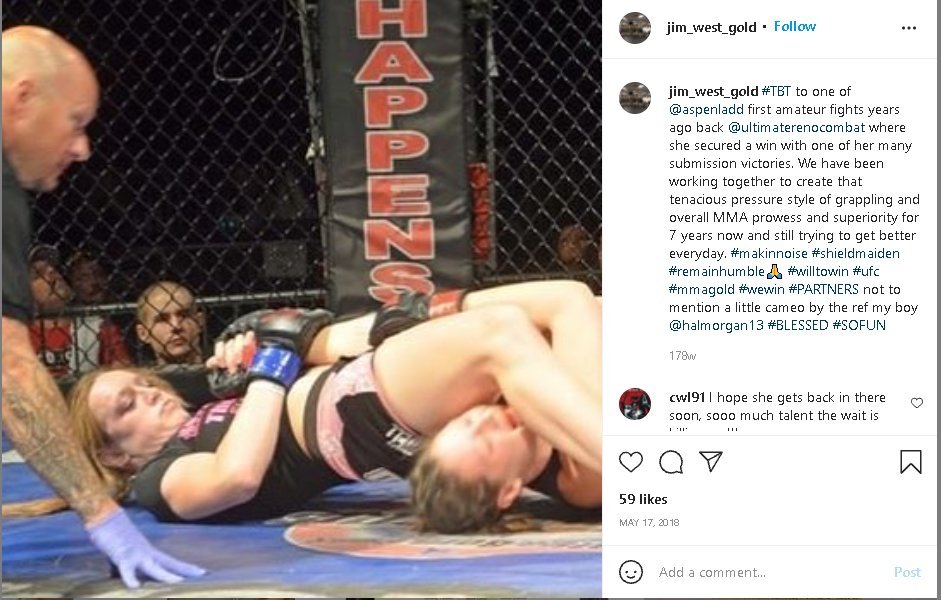 Ladd earned a jiu jitsu purple belt from MMAGold in 2014 so it’s not unreasonable to assume that majority of her training was under the MMAGold banner.

One of the earliest sightings of Ladd on the MMAGold social media was a Christmas Banquet in 2014. 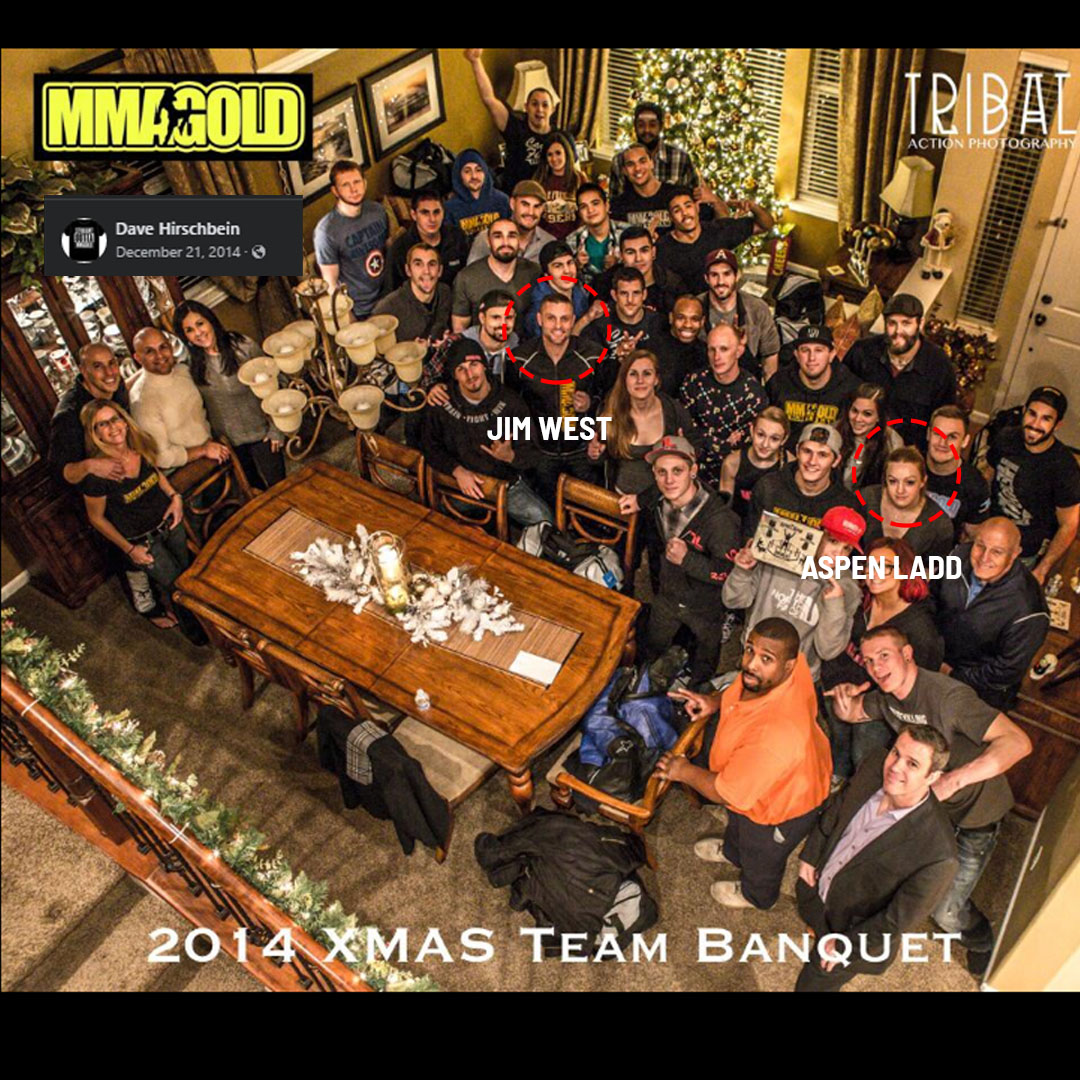 Despite this extensive list of credits West at no point shares his age – and there’s a pretty good reason for this. West is 44 years old  – and he was also married when he started MMAGold.  It’s unclear when his romantic relationship with Ladd started  – but we do know for a fact he had met her when she was underage and that he’s been with her for a number of years.

According to his own account he was married in 2005. He has a one child from this marriage born in around 2010.

UFC middleweight contender Sean Strickland often shares controversial takes – but this time he might actually have a point. The provocateur weighed in on the creepy relationships between Aspen Ladd and Rose Namajunas’s and their boyfriend coaches. Strickland believes that both are victims of predatory behavior.

We’ve previously examined the case of Pat Barry and Rose Namajunas so we turn our attention to the peculiar relationship between Jim West and his student Aspen Ladd.  Ladd has been with the UFC since 2017 – but nobody really paid attention until her Norma Dumont clash in 2021. At the event Ladd had the following exchange with West in between rounds.

"Please, tell me what you're doing?"

Aspen Ladd's corner was not happy ?

Aspen Ladd’s corner went viral when her boyfriend/coach Jim West shared some very harsh criticism in between rounds. Miesha Tate was among the first to campaign against  Jim West for his approach.

Miesha Tate was the most outspoken critic of the arrangement saying:

“It is, from my experience, generally problematic when a female fighter, especially younger, starts dating a coach. The more the age difference, the more they become, sort of, hooks in, claws deep, and they start to feel like they can rule your life. And that can happen even outside of fighting, but when you add that kind of dynamic to it as well, it can just be such an ugly situation. So I think it’s something we should definitely have conversations about, to make people a little more aware that it doesn’t have to be that way.” Tate told interviewer.

This prompted a response from Ladd:

“That’s the Karen of MMA. I just wanted to hit her, I still want to hit her. But, that’s not in my future right now. I have a different fight but purely, they wouldn’t have to pay me honestly. That would be a fun one.” Ladd said.

And an online apology statement from West, who rushed to private all his social media:

“It’s been our night many many times at the highest level but not tonight. I blame myself. Though it may not be my fault. it’s not up for debate. I take all the blame. Yes after the first couple rounds I may have been a little harsh but I know aspen and at that time technical conversation was not in the cards being down 3 rounds. Nonetheless I own it and I am sorry @aspenladd from the bottom of my heart [sic] I will continue to be better each time.”

But as with most UFC controversy the news cycles soon changed and MMA media moved on to another story. That is until Sean Strickland, in his never-ending quest for attention, inspired us to take a deep dive into the circumstances of this alliance.