Khabib Nurmagomedov has made waves in the world of business since quitting MMA. He purchased and rebranded a combat organization (Eagle FC) in addition to promoting a number of businesses.

Khabib Nurmagomedov isn’t shying away from the tenants of his faith despite his extended stay in the US. Recently he came out against betting sites and pledged Eagle FC will never take them on as sponsors.

Oddly Nurmagomedov doesn’t mind cryptocurrency sponsorships. And he now owns a fast-food company as well. The latest business titled ‘M-eat by Khabib’ serves sandwiches made with horse meat and beef.

The selling of horses for human food is prohibited in the United States, which has complicated rules governing the consumption of horse flesh. However, horse meat is a delicacy and has little to no social stigma in many nations throughout the globe.

Khabib Nurmagomedov now has seven locations in Moscow, Russia. The business has rapidly grown a sizable social media following. In a short period of time, it has amassed more than 20,000 followers on Instagram. 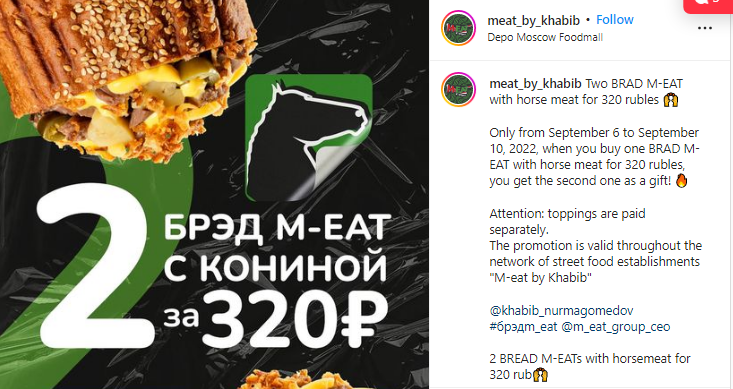 The UFC Hall of Famer also promoted “M-eat by Khabib” through the Eagle FC platform. The company is sponsored by the fast-food chain.

Despite quitting mixed martial arts in 2020, Nurmagomedov is said to have a net worth of over $45 million.

To the surprise of many, UFC financial reporter revealed that the biggest confirmed UFC contract he knows of belonged to Nurmagomedov.

The 33-year-old retired from competition with a perfect 29 wins to 0 defeats record and was also inducted into the UFC Hall of Fame.

“I’ve heard from multiple sources that the highest guaranteed check ever is probably Khabib,” Nash told Luke Thomas. “It was at least six million but I heard it was probably maybe ten million dollars guaranteed for his last couple…”
Nash then explained that part of that lucrative payment was due to Khabib Nurmagomedov being involved in getting the UFC a deal with the United Arab Emirates.
“A big part of that supposedly was he was the guy that helped negotiate that United Arab Emirates deal,” Nash said. “Also the middle east north African TV deal he was part of”
The UFC signed a five-year partnership with the Arabian country in 2019. The deal guarantees title events to be held in Dubai through 2024.
WE ARE HIRING!