T.J. Dillashaw was pretty much doomed going into UFC280 – and he knew it. Dillashaw injured his shoulder back in April and had repeatedly struggled with in camp. To put things into perspective any time a shoulder falls out of socket it amounts to a lot of pain and Dillashaw confirmed it happened upwards of 20 times in camp.

Dillashaw lost in Round 2  via TKO stoppage after his shoulder fell out early on in Round 1 and he struggled to put it back in place. His corner was finally able to do it but the shoulder popped out again in round 2.

T.J. Dillashaw explained he got the injury in camp during octagon interview:

“It popped out right away – I’ve got to apologize to the weight class. I kinda held it up. I completely blew my shoulder out at the end of April, as soon as I started getting ready for this, and probably dislocated a good 20 times during training camp.”

Dillashaw continued, elaborating on the contest with Sterling, stating:

“This is by far the toughest training camp I’ve been through because of that, emotionally. That’s why I was talking some s**t about his standup, because I didn’t want him to wrestle. I knew that was the case. ” 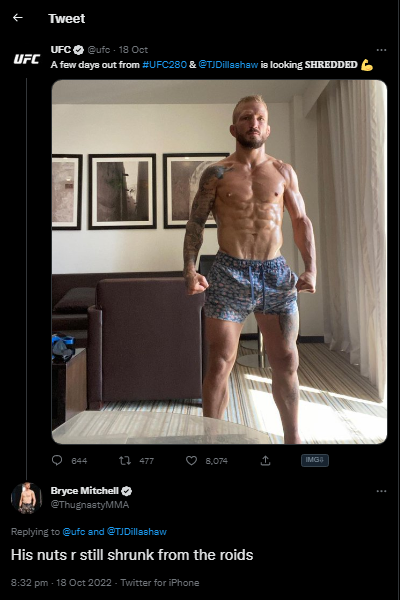 “I told the ref in the back before we came out that most likely my shoulder was going to pop out – if it does, I’ll get it back in – please do not stop it. Unfortunately, in that second round, I couldn’t push off my shoulder. So hat’s off to Aljamain for doing what he does, and great win.”

T.J. Dillashaw had surgery to fix both of his shoulders in 2019. He was criticized by fans and fellow athletes in the fall out from the admission.

Fans are especially bitter Dillashaw ended up taking the title shot that should’ve gone to Jose Aldo – who since retired.

There’s also plenty of speculations going around that Dillashaw did so because he was in need of money. After all he was inactive for 2 years after he tested positive for PEDs. Dillashaw is 36 years old and has an increasing number of injuries that make it unlikely he’ll stay active for a while longer. He made his professional debut all the way back in 2010.

“I had no idea, so that’s a problem. How could the athletic commission know if he doesn’t tell us? You’ve got to tell us. He looked good. It’s not like he came in out of shape, or looked like he was injured, but yeah, that’s something he should have told us.”