MMA star Conor McGregor threw a wild birthday party last week. The Irish sports star bumped into a huge fan who has an intricate tattoo of him inked on her arm.

Conor McGregor just turned 34 on July 14. The former two-division champion has been back home in his home country Ireland to train for his upcoming blockbuster return. However, he recently flew to the Spanish party island of Ibiza to celebrate his birthday with family and friends.

Conor McGregor jetted to the island with his long-time fiancée Dee Devlin, his mother Margaret, and his two sisters Erine and Aoife. His partner’s sisters also came along with a number of training partners.

McGregor was walking around in the crowd topless and stumbled with a huge fan who has an incredible tattoo of Conor McGregor on her arm complete with the Irish flag. ‘The Notorious’ took several pictures with the fan. 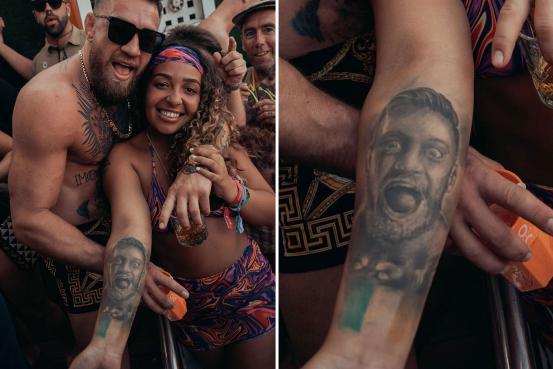 The lavish birthday party was held at the Destino Pacha Resort in Ibiza island. But McGregor also visited Wayne Lineker’s Ocean Beach club and posed for a picture with the nightclub owner.

Conor McGregor posted several pictures on his social media account showcasing the festivities of his birthday party. McGregor was decidedly less jovial when a different fan decided to throw his hat at the UFC star and was seen stomping it.

Conor McGregor snapped his leg back in June of last year when he faced Dustin Poirier at UFC 264. The 33-year-old hasn’t appeared in the octagon since then. But, the time for his blockbuster return is just around the corner as McGregor revealed that his leg is now healed.

Conor McGregor is currently looking very jacked compared to his appearance last year. The double champ is considering moving up in weight but nothing’s been decided.