Conor McGregor has been on social media nonstop. Following the shocking confession about cheating during Poirier and Khabib Nurmagomedov fights McGregor decided to share another revelation about his career.

According to the irish sports star – he had been injured since 2013.

“I became a master at fighting on one leg since my acl reconstruction in 2013. I won all my ufc world titles on one leg. It’s why I was able to maneuver thru the fight even tho it was snapped, and not bear weight fully until the very last seconds of the round.” 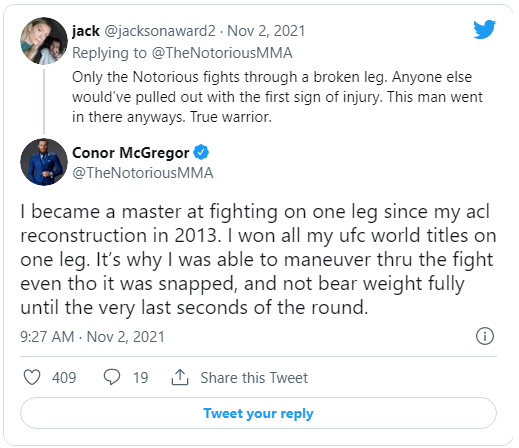 The injury was alleged to have happened during the fight against Max Holloway.  And that’s not all – McGregor alleges he tore the ACL in the lead up to the Chad Mendes fight at UFC 187.

But neither of those injuries was more fatal than that gruesome leg break we all witnessed at UFC 264.

“He’s ahead of schedule,” Attar said. “We not only just got our X-ray results [back], [we got] our ultrasound results and CT scan results. And when I look at the view of the X-ray myself, it’s healing so beautifully.

“He’s only 10-and-a-half weeks out of surgery and he’s walking. And he’s actually doing s–t that we don’t want him to do like throwing the first pitch at the Cubs game.”