Torres and Pennington are following in the steps of the Nunes’ and recently announced they are expecting their first child.

As a mom who also competes in the UFC, Torres will join Amanda Nunes and Nina Nunes in taking a hiatus from competing to conceive a baby. Torres and Pennington have been married for a while and are now taking the next steps.

The UFC strawweight posted on Instagram that she was expecting:

“We have a little extra to be thankful for this year. Happy Thanksgiving from our growing family to yours. Baby Pennington coming June 2023 ❣️We are beyond excited and feel incredibly blessed. Mommies love you so much sweet baby and we can’t wait for this life with you. ✨ @raquel_pennington” 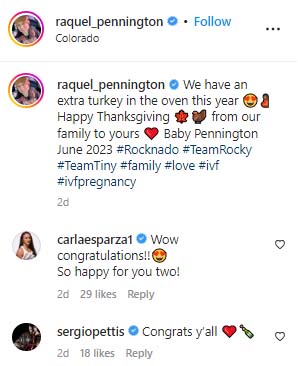 Torres began her MMA career with four victories. This includes her victories over Paige VanZant, Rose Namajunas, and Felice Herrig. She then appeared on TUF season 20. Despite not making it to the reality show finals, Torres still got a contract with the UFC.

Torres has a 9-6 record in the UFC, including a 6-1 start. Despite losing recent match against Mackenzie Dern, Torres has developed into a viable strawweight contender.

After delivering her first kid, she intends to make a comeback in 2024.

While Tecia Torres is expecting, Raquel Pennington will continue in her profession. After Season 18 of TUF, Pennington joined the UFC. She had an 11-5 promotional record.

The two are respectively 33 and 34 years old. Pennington last competed against Aspen Ladd back in April of 2022.