Tony Ferguson has had it with the UFC. Former interim lightweight champion aired many of his grievances last night during the UFC 274 press conference.

Ferguson is scheduled to square off against Michael Chandler. He has been steadily falling in rankings thanks to suffering three defeats in a row – to Charles Oliveira, Justin Gaethje and Beniel Dariush.

To start with Ferguson addressed the losing streak and said he blamed much of the results on his coaching team. This isn’t the first time Ferguson shared such concerns – he previously criticized his team for not even bringing him water in between rounds.

This isn’t the first time Ferguson raised these concerns. While usually Eddie Bravo gets the brunt of the criticism for eccentricities in Ferguson’s corner, in his absence a power struggle ensued.

“How about middle of UFC 256 between 1st-2nd round trying to figure out why your appointed cornermen wasn’t there w/ you talking game plans from camp. Wtf

” Ferguson wrote on his social media.

“Backstage one of my trusted cornermen lied to the others and said I said it was ok for them to take charge when I was getting changed. Completely opposite what my request was earlier to the whole team. ”

“The guy basically bullied the others with seniority behind the scenes & took position when UFC asked my team who was in charge. They mic’d him up & there it went. ”

“That person was such a good coach they forgot to bring me water in between rounds. Thanks Tommy for getting it to me.” Ferguson revealed in a series of posts on instagram in 2020.

Contrary to popular belief, Eddie Bravo is still a part of Ferguson’s circle. Bravo has been laying low ever since Rogan secured that huge spotify deal  – that is until earlier this year when he launched his new subscription based podcast where he spouts controversial ideas. 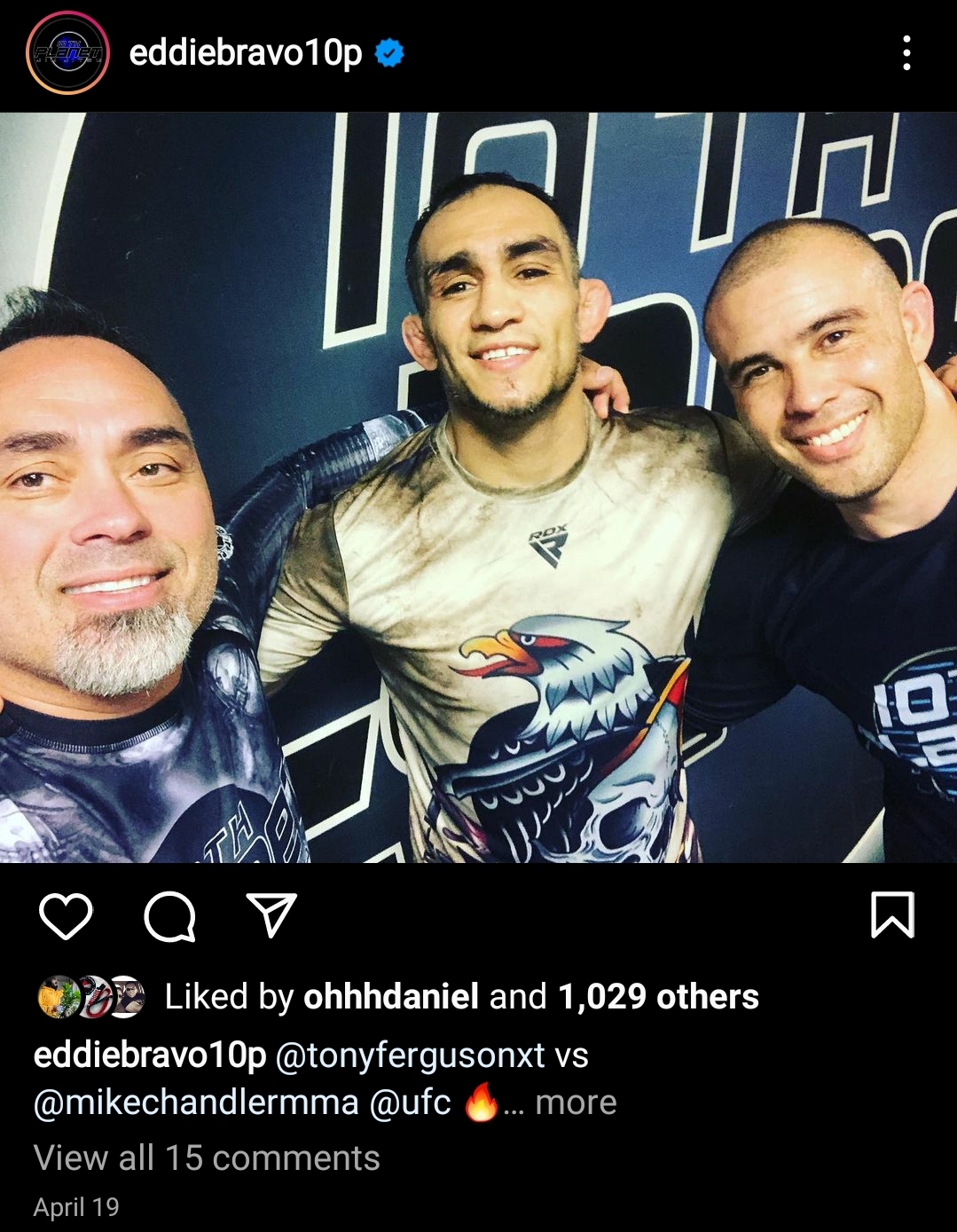 Bravo was previously heavily criticized for his cornering of Ferguson in 2020. A mask clad Bravo had been giving Ferguson nonsense advice during his loss to Justin Gaethje.

“At the end of the fourth, Rashad [Tony’s striking coach] turns around and goes ‘Eddie, get in there’! And I wasn’t ready for it man….and I walk in and I’m like ‘what the f**k am I- I mean, I’m not an MMA head coach” Bravo explained his decision to give Ferguson praise and prompt him to do an imanari roll.

Bravo copped to lack of structure in the corner and also admitted that him going out there in the 4th round to give advice “was a mistake”.

-Says he was surprised when Tony’s striking coach asked him to speak to Tony at the end of the fourth
-says him going in at end of fourth to talk to Tony “was a mistake”#UFC249pic.twitter.com/sQ03wKnTy2