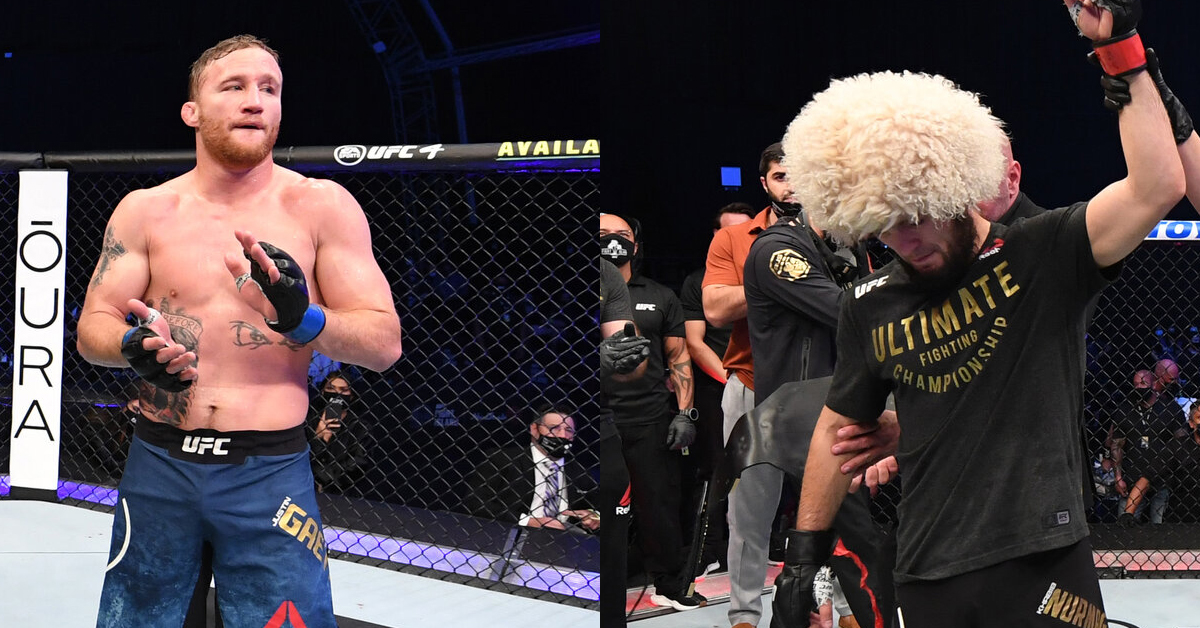 After winning the fight against Michael Chandler at UFC 268, Justin Gaethje thinks it is about time for him to get a title shot and fight the winner of the upcoming UFC 269’s lightweight title bout. The 32 year old fighter is currently ranked number 2 on the UFC lightweight ranking next to Dustin Poirier.

He’s not wrong either – Makhachev has been consistently fighting lower ranked guys and rising in the lightweight division rankings. Which isn’t to say Makhachev isn’t good – it just shines a light on what good management can do.

And speaking of management – Makhachev and Gaethje share a manager in notorious Ali Abdelaziz. While Gaethje is no doubt a lucrative client it can be speculated that Abdelaziz stands to gain much more by giving better representation to the Dagestani.

Khabib Nurmagomedov has a different opinion. Khabib believes Justin Gaethje is not worthy of the title shot. The UFC veteran says Islam Makhachev should be the one to get the title shot. Khabib even compares the record of Gaethje and Makhachev, saying Gathje lost 3 of his fights in the last 8 fights while Makhachev is on his 9 win streak.

“In the last 8 fights, you got finished 3 times, Justin. You had an opportunity to become champion, but you fell asleep. Islam Makhachev is on the 9 win streak, 3 fights in 2021, and all finishes. Just shut up and admit that Islam deserves this title shot, not you.” Wrote Khabib Nurmagomedov.

Khabib Nurmagomedov responds to Justin Gaethje calling for next shot at the #UFC lightweight title pic.twitter.com/VISBdJZbFU

Islam Makhachev won against Dan Hooker in UFC 267 via submission and is currently on number 4 on UFC lightweight rankings. Makhachev and Khabib grew up together in Dagestan and have been longtime teammates and friends. Khabib also coaches Makhachev and successfully led him to many victories.

UFC fight night: Makhachev vs Moises had a main event featuring Islam Makachev duking it out with Thiago Moises. What nobody seemed to mention is that this main event featured number 8 duking it out with barely ranked (#15) Thiago Moises. And somehow the end math was Makachev advancing to 5th in the rankings with his manager being outspoken on how he sees Makachev becoming a title contender if he were to come out victorious against Rafael Dos Anjos. What’s even more interesting is that former champion Dos Anjos is currently ranked below Makachev at number 7. So effectively failing upwards is encouraged as long as the opponent has some name recognition. Of course pull out champion Rafael Dos Anjos backed out and was replaced with Dan Hooker who had just fought. Hooker was rumored to be handsomely compensated for validating Makhachev’s title aspirations.

Hooker was the only Makhachev opponent with an actually impressive record. Before that he fought Moises (#15), Drew Dober, Davi Ramos and Arman Tsarukyan. At least 2 of them were unranked at the time of their fight with Makhachev.