Paulo Costa has gotten in an altercation with a female nurse. The nurse in question was assigned Covid-19 vaccinations. According to reports, Costa wanted to have the paper that he received a Covid-19 vaccine even though he hadn’t received it.

“The card was filled out. The workers said that, at the time of application, he did not accept to be vaccinated, he wanted to leave with the card and they did not accept it. At that moment, a nurse was elbowed”, said municipal guard Marco Mota.

“He said he got the vaccine, but the nurses didn’t let him go out with the card. He said it generated stress, he took the card and left. At that moment, a nurse grabbed him by the arm and he broke free. He doesn’t acknowledge the elbow”, detailed the guard.” as per Mota.

Afterwards Costa started joking around on twitter, comparing his legal predicament to that of Jorge Masvidal’s.

In the end – joking around wasn’t enough considering there are allegations that he elbowed the female nurse and left her with swollen lips.

His team has taken to social media to release an official statement:

“The recent articles published by the media involving athlete Paulo Costa — “Borrachinha” referring to what happened in a shopping mall in the city of Contagem/MG generated questions, so we must present some clarifications.”

“First, tending to sensationalism, these are reckless and inconsistent.”

“The athlete Paulo Costa – ‘Borrachinha’ and his entire team reject any type of violence.”

‘Borrachinha’ is a high-performing athlete, full time dedicated to training, to following the rules, guidelines, and disciplines. According his philosophy and human conduct this kind of allegations are completely incompatible with his history and way of life.”

“The accusations and facts narrated do not reflect the reality of what happened.”

“The fact will be carefully investigated and the appropriate legal measures for their perfect clarification will be taken.” 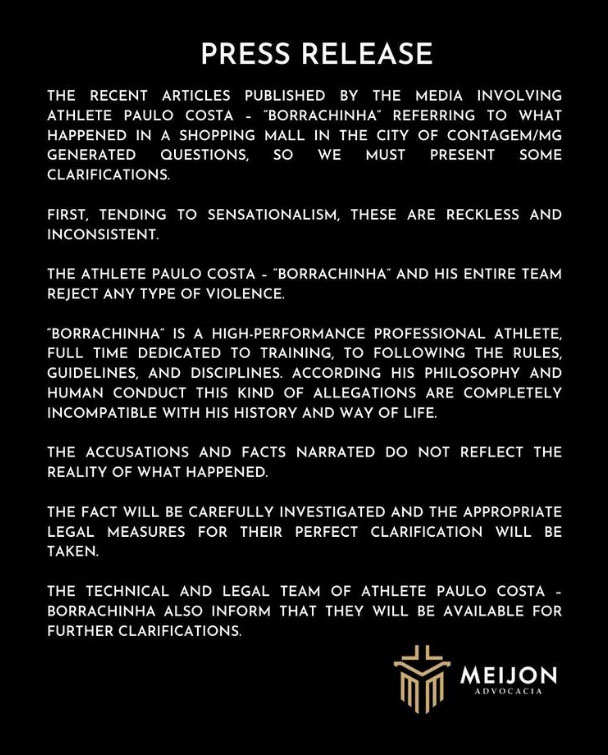