News of Paulo Costa’s arrest surfaced yesterday. Brazilian police confirmed there was an incident in which a nurse alleged Costa had elbowed her to the face after requesting a certificate that he had received a vaccine despite not getting it.

“He said he got the vaccine, but the nurses didn’t let him go out with the card. He said it he was stressed, he took the card and left. At that moment, a nurse grabbed him by the arm but he broke out of the grasp. He doesn’t acknowledge the elbow”, detailed the guard.

Despite the fact that Costa was alleged to have been in physical altercation with a female nurse – who had swollen lips as a result of the incident, Costa wasn’t really condemned. For one, many MMA athletes and fans have controversial opinions toward the vaccine so it’s likely that’s skewering the judgement.

This allowed room for Costa to shrug off the news of the incident and to try and spin the entire thing as a humorous anecdote.

“They say cooks have some perks here inside the prison. Just saying I don’t like burritos cabron.”

they say cooks have some perks here inside the prison. Just saying I don’t like burritos cabron pic.twitter.com/w8RoiPaw64

Masvidal was recently booked on a felony after reportedly striking arch nemesis Colby Covington in Miami.

Costa also made PED jokes related to the incident.

I know how to do my fuck self vacination , if you want to do come and bring your card please pic.twitter.com/DXCReJmdEH

Costa didn’t leave it at that either – he went on to reference another show about prison. 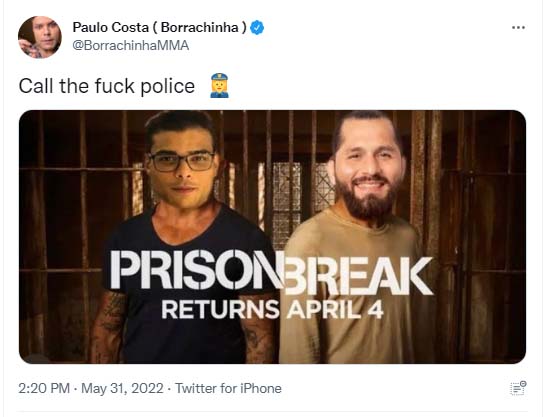 Costa is presently on a two-fight losing streak in the UFC. He has a record of 13-2.

“The suspect, aged 31, and the victim, aged 26, were taken to the Contagem precinct, where they were heard by the police authority, which requested the forensic examination,” the statement read. “At the time, the woman expressed interest in pressing criminal charges against the fighter, and the Civil Police wrote a Circumstantiated Term of Occurrence (TCO), in which both sides agreed to appear in a hearing before the Special Criminal Court of the municipality.” – Police said about the incident.

Costa’s most recent fight was against Marvin Vettori. In the match, he was defeated by Vettori by unanimous decision after much fanfare about failing to make weight.

Many people have voiced worry over Costa not making weight in the lead-up to his next fight against Luke Rockhold. Chael Sonnen is one among them.

Sonnen expressed his confidence in Masvidal not making weight for his probable fight with Rockhold in a recent YouTube video posted to his channel.

“Paulo can’t make weight. Paulo’s not going to make weight. I’m not looking into some crystal ball here. We know as human beings we don’t get smaller with time”

“We know about the work ethic and training of Paulo Costa. We know that Chael personally has made a very loud and boisterous push to get Paulo out of division completely and just give him a fresh coat of paint, a new start at 205 pounds.”

“Now if I’m wrong and he pulls down to 185, fine, eat my words. But I’m very comfortable telling you guys that’s not going to happen.”