Floyd Mayweather Jr reportedly earned a huge payday after betting that Canelo Alvarez would lose against Dimitry Bivol. The 45-year-old won a whopping $52,500 for bravely putting his money against the pound-for-pound king.

Dmitry Bivol entered the ring undefeated yesterday at T-Mobile Arena, Las Vegas. The 31-year-old Russian put his WBA light heavyweight title on the line against Alvarez who was returning to light heavyweight.

The two boxed for full 12 rounds but Bivol was clearly more dominant. He was announced as the winner via unanimous decision with three judges scoring the bout 115-113 in Bivol’s favor.

With this victory, Bivol remains undefeated with a total of 20 victories. He successfully defended his title for the 4th time.

As for Canelo Alvarez, the Mexican ended a sixteen win streak in his second loss, with the first one being dating back to 2013 against Floyd Mayweather.

Following the boxing bout, Floyd Mawweather took to his Instagram account to show his fans that he just won a huge bet. ‘Money’ uploaded a picture of his betting ticket showing he put $10,000 for Dmitry Bivol.

“Easy pick up.” Mayweather wrote in the caption. 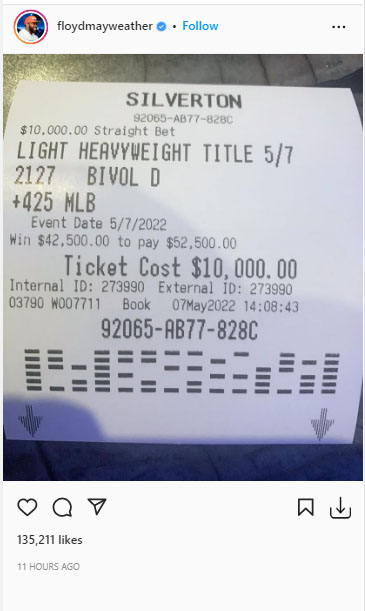 Even though he has retired from professional boxing, Mayweather is still pursuing money from exhibition matches. His last appearance was in 2021 when he fought the famous Youtuber Logan Paul. Next week, the Michigan born will have another exhibition match against his sparring partner Don Moore.

The pair will headline the event called ‘The Global Titans Fight Series’. This event will be held on May 14 and will take place on a helicopter landing pad in Dubai. They are scheduled to exchange blows in an eight-round exhibition match.