UFC veteran Daniel Cormier revealed his reasoning for why Khamzat Chimaev was having a hard time at UFC 273. If Cormier is to be believed, it is because Chimaev is a devout Muslim who was honoring the Ramadan fast.

During Ramadan, adult Muslims who observe the fast are not to eat or drink from sunrise to sunset. Of course, the length of time a person fasts for varies depending on where in the world they live as day length is governed by the time of year and the distance one is from the equator. But considering Chimaev had spent a substantial amount of time in Las Vegas in lead up to UFC 273 he was likely looking at on average 13.1 hours of daylight, with sunrise at 6:08 am and sunset at 7:13 pm.

The welterweight star faced top contender for the first time at UFC 273 on April 9. The 27-year-old Dagestani clashed with Gilbert Burns (who was ranked at 2 in Welterweight division). After clashing for 3 rounds, Khamzat Chimaev was announced as the winner via unanimous decision.

Many UFC fans would agree that Chimaev showed a different side of himself last weekend. Unlike in his other outings, ‘Borz’ was struggling at times against Burns.

His struggle with Gilbert Burns led many fans to jump off the hype train.  In the fall out of UFC 273 many fans insisted that Khabib Nurmagomedov was superior to Chimaev in addition to pointing out Chimaev’s battle wounds. 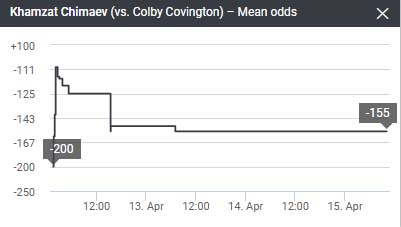 “Here is another thing, that we are not really talking about much in terms of Khamzat…Khamzat is a Muslim, he’s a Muslim man.” Cormier said.

“He’s fasting all day and taking on the biggest fight of his entire career this weekend. I had a guy that lived with me, and he could barely train wrestling. So to train and prepare for a high-level fight right now speaks to the type of savage that Khamzat Chimaev really is.” Cormier added.

Khamzat Chimaev is currently ranked at number 3 on the UFC welterweight rankings.