Khamzat Chimaev has been thirsty to find another worthy opponent after his fight with Li Jingliang in October last year. The Chechen Wolf challenged many big names in the UFC in and out of his division – namely Nate Diaz, Conor McGregor, Colby Covington and many more. Most of them are uninterested in the matchup – he’s outside the division they’re in or he’s substantially lower in rankings. Welterweight Neil Magny offered to fight him but was ignored for the sake of marketing Chimaev as a fighter ‘nobody wants to fight’.

Chimaev is a substantial threat for the welterweights – he fought four times in the UFC and won all the fights with finishes, quickly putting him in the top 15 in the UFC welterweight rankings. It’s a shame Demian Maia was released because we have a feeling he’d be the perfect gate keeper to stop the Chimaev hype train.

UFC welterweight contender, Gilbert Burns, is an exception. He is willing to take on Chimaev’s challenge in spite of Chimaev jumping the queue. The two talked about a fight on Instagram direct messages and subsequently shared with the public.

Previously, they agreed to face off in May. But Burns asked Chimaev  to push it forward for April. 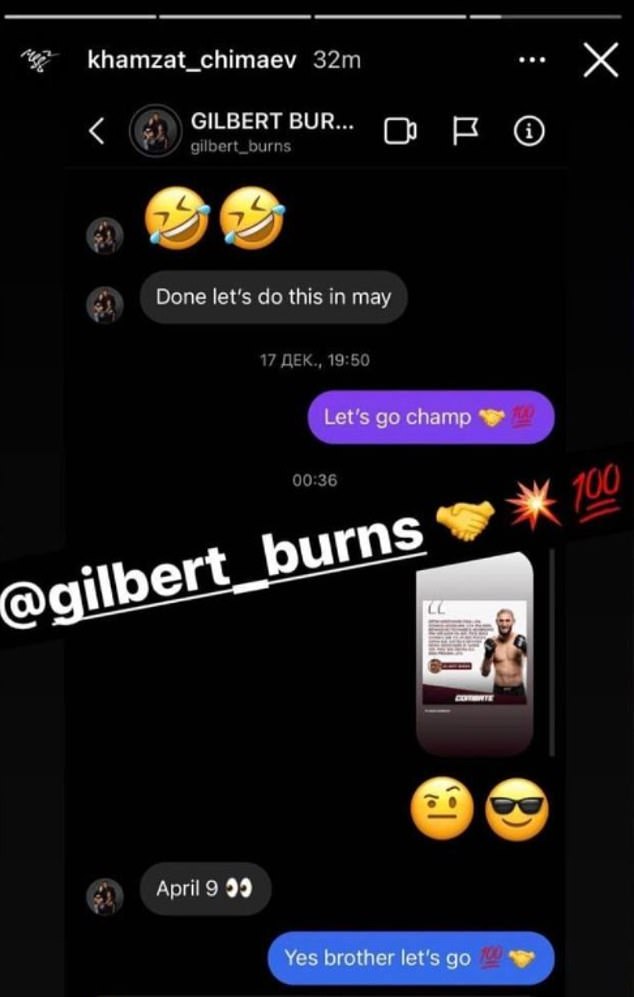 Gilbert Burns is definitely the kind of opponent Chimaev has been looking for – top-ranked fighter. The Brazilian is currently sitting at number 2 in the welterweight division, right after Colby Covington. He failed to snatch the welterweight title from Kamaru Usman in February last year, ending his 6 fight win streak. Burns defeated Stephen Thompson in July after that. It’s unclear what he stands to gain from this match up.