UFC athletes are more and more aware they’re in the entertainment business with each and every passing day. This is perhaps why so many of them are deciding to offer online trolls and haters a chance to try themselves in a live sparring session against them.

Sean Strickland provided the latest addition to this video archive.

Strickland is renowned for his chaotic sparring matches with his teammates. At Xtreme Couture, he has sparred with some of the best competitors, including Francis Ngannou.

He was also slammed by the public repeatedly after going overboard in separate sparring sessions. Strickland threw a kick at his grappling partner after he became convinced that he was trying to injure him.

Strickland also knocked out a sparring partner in a separate incident.

This time, Strickland obliged a a pro boxer who wanted to spar him and had expressed so on social media.

During a recent sparring session at Xtreme Couture, Denis Douglin discovered the hard way what happens when you call out a professional mixed martial artist with Strickland’s experience and skill set. 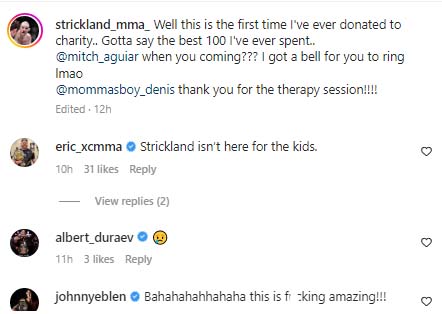 Strickland posted, “Well this is the first time I’ve ever donated to charity.. Gotta say the best 100 I’ve ever spent. [Mitch Aguiar] when you coming??? I got a bell for you to ring lmao. [Denis Douglin] thank you for the therapy session.”

Douglin is a professional boxer with a 23-8 record. He was significantly outmatched by Strickland in terms of height and weight. During the session, Douglin talked trash However, Strickland seemed to prevail in both verbal and physical aspect of the conflict.

Douglin and Strickland then seemed to put their differences behind them and appreciate one another.

At UFC 276 earlier this year, Strickland was defeated by Alex Pereira. Next month, he’ll square off against former title contender Jared Cannonier.