Yesterday we wrote about about Hunter “Alpha Wolf” Boone. Boone had the misfortune of having his head split open thanks to a faulty cage during Martial Combat League 3 event. 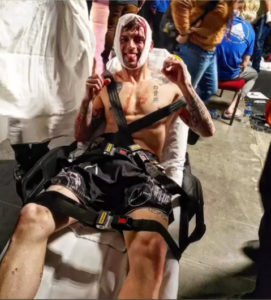 Boone appeared to have taken the catastrophic injury in stride and was seen in good spirits following the incident. However many who witnessed the event are displeased with how the organization is dealing with the injury. For disturbing images of injury go to the original post.

“We’d like to address the incident that occurred during a fight at last nights event. We understand and appreciate everyone’s concern on what happened and our hearts are with the individual who was injured in this incident. We were in just as much shock as anyone when this ocurred. We assembled our cage no differently than we have for each of our previous events. IT is our understanding that  the sanctioning commission of the event inspected the cage prior to the show. No issues with the cage were brought to our attention by the sanctioning commission. There was a very unfortunate event that occurred during a takedown near the door of our cage. How the injury occurred is still undetermined and there was no clear sign as undetermined and there was no clear sign as to what or why this injury took place. After the cage was cleared of the incident, our cage was fully inspected by multiple individuals of the sanctioning commission and our cage was deemed necessary to continue. We don’t have an answer as to why this injury occurred and we’re, without a doubt, extremely sorry to the individual who suffered this injury.

“We’re not sure how or why concerns were brought up about us not taking care of the injured athlete, this certainly is not the case. We take required action and secure proper coverage to make certain qualified injuries occurred are covered prior to every event we promote,. 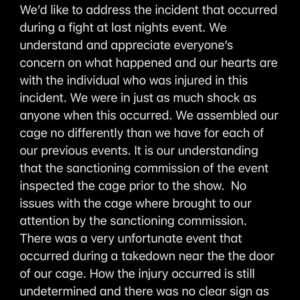 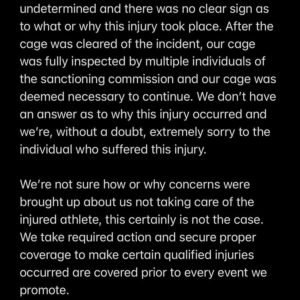 “And again, our hearts, thoughts, and prayers are with the individual involved in this incident,” They concluded.

Boone can still take the injury in stride. Earlier he posted the following with the caption “The face you make when someone peels back your scalp…”

Thanks to the inept response from the organization a video was sent in by an observer. The video clearly shows Boone’s head colliding with the cage door during a takedown.

Martial Combat League made no further statement but shared a series of pictures from the event including allowing for two kid wrestlers to face off in the same cage.