UFC has been trying to tip toe around politics ever since the ownership was taken over by Endeavor (formerly WME). The publicly traded company managed to dodge Palestinian crisis only to be greeted by the prospect of the new European war – first in quite a while.

To pre-empt backlash, UFC opted to ban all fighters from carrying flags during their walkouts. National pride was previously a key component in many fighters performances.

The ban was first outed by Chito Vera – who confirmed he can’t be repping Ecuador during his headline bout. Since then Petr Yan confirmed that the ban was instituted due to the Russian invasion of Ukraine.

And Dana White confirmed the ban was there to stay.

Not being able to carry the flag while walking out could change crucial aspects of how certain athletes market themselves. Conor McGregor made it a huge point to even have his shorts matching the flag.

Besides Conor, the flag ban is likely to impact Justin Gaethje, Cowboy Cerrone and Colby Covington who are all proud Americans.

But with the beginning of June another controversy occurred – UFC is offering athletes the option to celebrate Pride month (no not the MMA organization) with homage on their fight kit.

In addition to the figh kit homage – UFC is also selling PRIDE merch. 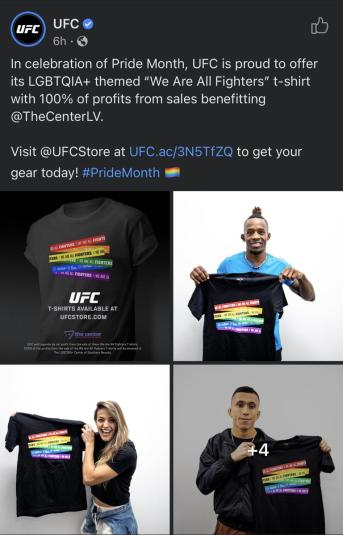 Many fighters and fans are irked by this decision.

The UFC is selling pride merchandise for pride month. But, Dana White its president is a transphobe who doesn’t believe trans women should fight cis women. Don’t buy this disingenuous shit. pic.twitter.com/04se8rqCuH

When the UFC tries to grab your money — and minds —  with their Pride merch, remember it does nothing when their fighters bleat out bigotry.

If pride fighting was still around this would be their logo for June pic.twitter.com/lRYNfmGRKV

Hey @danawhite you going to be wearing your UFC pride shirt this weekend? I'm thinking thats a big no effing way…