2022 has barely started and Joe Rogan has had to overcome a lot in order to keep his Spotify deal going. The lucrative partnership is estimated to be worth roughly $200 M. Spotify is of course getting the right to exclusively distribute the Joe Rogan Experience.

Still, Rogan isn’t scared to weigh in on hot topics. The latest problematic issue he addressed is the case of Lia Thomas, a trans athlete who had recently won the 500m freestyle swimming competition in NCAA – in the women’s division.

This, of course, would be a non issue if it weren’t for the fact that Thomas is a pre op transgender individual who had opted to compete with women after years of competing with the men.

Rogan previously criticized Thomas arguing that this isn’t like MMA – in Swimming the women can’t opt out of competing against a trans individual.

The conversation between Rogan and guest Monty Franklin addressed the case of satire account Babylon Bee getting banned off of twitter and went on to talk about Thomas.

“I think if we’re going to be really inclusive, meaning, you know, you’re going to accept people across the board for whoever they are, whatever they do, no matter what, which I think we should, you should be able to joke about things too. And if you can’t joke that someone used to be a man, if you’re not even allowed to talk about anymore, now it’s forbidden. And you get in trouble for even questioning. That seems kind of crazy,” Rogan started the discussion.

“It seems kind of crazy when someone like really looks like a man. And you can’t even say that anymore. Like you’re not allowed to bring it up. Like okay, this swimmer, the swimmer from Penn State that’s dominating and crushing records. And just won an NCAA, just won, number one was was number 400-something as a male. Was, was swimming as a male a f—ing year ago, becomes a woman. And now is number one. If you can’t joke about that, you can’t say well…” Rogan makes a point about how absurd this scenario is.

This prompts his guest to ask if Thomas has undergone all the medical procedures that constitute transitioning from male to female whereupon the direction of conversation slightly shifts because Thomas in fact maintains functioning male genitalia and gonads.

“There’s an issue there, right? But what is going on? You know, first of all, you have like, you’ve gone through your entire puberty, you’ve gone through years and years of your body producing testosterone, which strengthens your tendons, your ligaments, and your joints, your muscles and all the lung capacity, heart size, there’s a lot of variables that are in favor of someone who goes through puberty and then transitions to a woman when it comes to athletic events just a lot.” Rogan described the biological changes that alone should disqualify Thomas from competing in the women’s division. He went on to recommend a different video on the subject, the great analysis Derek of More Plates more Dates infamy did on the subject.

“Derek is brilliant. And he really understands this from a scientific perspective, and breaks it down scientifically, the benefits of going through puberty.”

In case you’re curious about what those are, you can find our write up on More Plates more dates video here.

And further more Rogan describes that one image that’s embedded in everyone’s mind. The podium with Thomas on the number 1 spot and the other swimmers on the far right. 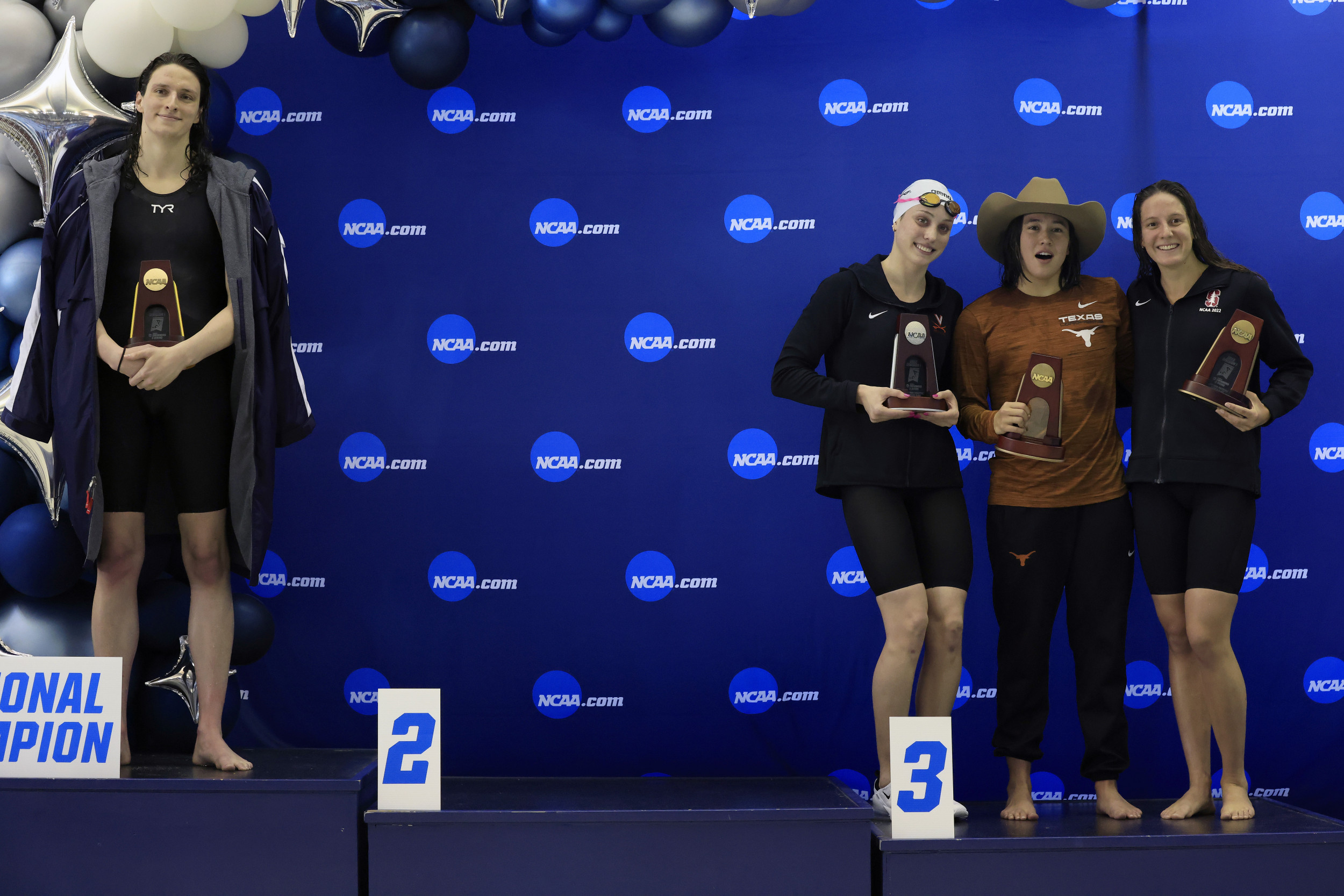 “Because look, I’m not saying you can’t identify as a woman be called a woman be treated as a woman. I’m all for that. Yeah. But when it comes to sports, when you’re talking about physical performance, there’s a reason why we have male categories and female categories. And when it’s demonstrated that someone who has very recently a male, has a significant advantage over the opponent to the point where they’re breaking records. Maybe, that’s unfair.”

Rogan went on to make another excellent point – the Lia Thomas scenario might actually be hurting the transgender cause due to the fact that this is blatantly seen as cheating.

“He’s another point. Maybe that’s causing more harm to the transgender cause than it is good.  Because you’re forcing this into into society in a way that’s gonna make people resentful. There’s some people that should be treated with dignity and respect that transition, they’re now going to be considered in the same way that this person is considered where they think of her as a cheater, they think of her as like cheating against these other biological females. ”

And Rogan is absolutely right on this, several months ago we covered a report from Intercept journalist Ryan Grim who put a spotlight on the research [that the] Trans lobby had conducted, [which found] that Thomas’ competing against women cannot be framed in a way so that the general public would support it.
In fact the research results are so damning they didn’t even publish the numbers for this finding. Instead the trans lobby suggested Thomas try and link herself to racial injustice – hence the pushed comparison to Jackie Robinson she tried some months back and other, more recent attempts by mainstream media.

Joe Rogan presents the case that Lia Thomas might actually be hurting the transgender cause #liathomas #joerogan (2/3) pic.twitter.com/K2oEB2km1J

Joe Rogan presents the case that Lia Thomas might actually be hurting the transgender cause #liathomas #joerogan (3/3) Read more at https://t.co/aGIoE6rkGt pic.twitter.com/R04R7u39K5