Transgender swimmer Lia Thomas has been a huge topic of interest for everyone that cares about sports. The swimmer used to compete in the men’s division with mixed results but is now breaking records left and right. 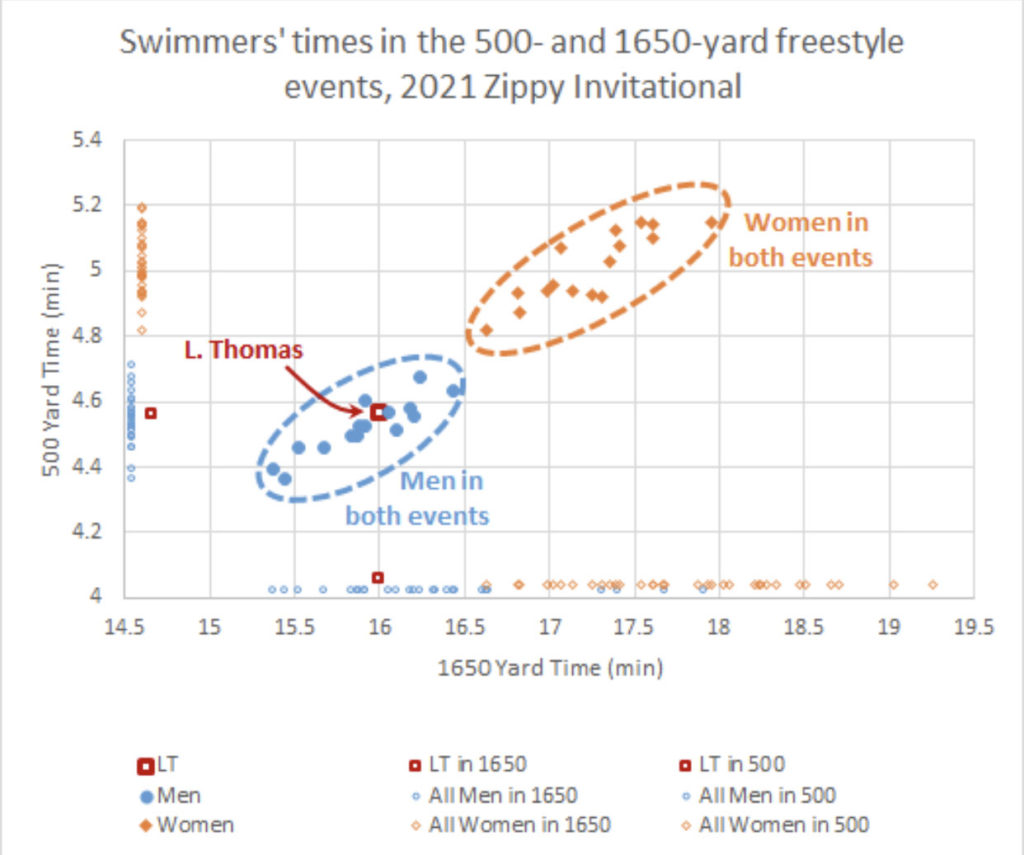 Thomas’ latest victory brought her a much coveted NCAA title in women’s 500 yard event. Thomas defeated Virginia freshman Emma Weyant by 1.75 seconds with a time of 4:33:24. This is a far cry from Thomas’ previous 500 yard times – which is why Caitlyn Jenner was skeptical of the performances saying Thomas took it easy on the women and tried to win by a reasonable margin:

‘Lia Thomas just dominated in the pool, and I’m sure she took it quite easily because she did not want to win by too much,’ the I am Cait star said.

But regardless of how you feel about the situation, examining the situation in terms of science seems particularly helpful. For starters, Thomas retains her genitalia and gonads.

‘Lia still has male genitalia, and I think most would agree has retained a significant advantage in several aspects above and beyond the ability to literally pulse intratesticular Testosterone on a whim just by manipulation of the pharmacology she uses for suppression.’ writes Derek of More Plates More Dates infamy.

The doping expert went on to publish a lengthy video deconstructing the advantages of Thomas over fellow female swimmers. The entire video is 50 minutes long and very interesting. We’ve extracted specific quotes relevant for the topic, but the whole video is still worth watching (attached below).

“…The idea is that if you just suppress your testosterone levels enough with medication, that you do not need to remove your male genitalia. So despite the fact that you have the potential to produce male levels of testosterone as long as you are essentially like pseudo castrating yourself with medication, you are equated to a female and performance, you know, synthetically equated apparently according to the IOC(International Olympic committee ), that’s what they believe. ”

” And it’s obviously highly controversial because you still have a functioning motherf—ing ball sack like obviously, there’s a lot of potential for f—ery there especially when you have medications that are in your system a very short timeframe.”

But beyond the ridiculousness of the IOC guidelines, there is stuff to say just in terms of recovery:

“…if I pseudo castrate myself, and my testosterone levels are equal, above and beyond the, you know, anatomical differences up above and beyond the f—ing energetic exposure, even in your brain, like your recover – recovery capacity, when you are a male going through puberty compared to a female with ten times the testosterone levels you’ve only been transitioning for, you know, a couple years, your peak f—ing your 20 years prior to that you had all of the male hormones, allowing you to be in the pool, practicing in competition, doing competitions, getting increased recovery from those increased test levels, ability to do things that you would never ever be able to do as a female at a significantly heightened level.”

“And then once you deprive yourself of those hormones, you don’t suddenly go down to ‘Oh, you never had any of that’ f–ing skill accrual, none of that s–t happened. Like it’s still there, it’s still there. Sure your performance will suffer a bit. As your hematology decreases a lot of your red blood cell production, oxygen carrying capacity is androgen driven. EPO, a lot of this s–t is very intertwined with being male in terms of elevating your hematology profile. But again, just because your testosterone is depressed and suppressed significantly with these, you know, hormones that you’re intervening with. It doesn’t mean that all of a sudden, because your red blood cell count on paper transiently might be equated to that of a female, that is the all of a sudden, like, your lungs are no different. Nothing’s different. Everything’s the f–ing same. It’s absolutely mind boggling.”

Derek also covered another significant aspect of what it means to be a biological female – periods:
“But going back to the hematology discussion, you don’t have periods either. When you’re a f—ing transition athlete, you are somebody who was suppressing your testosterone levels, but you don’t bleed out some of your oxygen can your carrying capacity on a regular basis, there are individuals who are a lot of females who are like f—ing iron deficient because they bleed like you don’t bleed out of your d–k.”

Derek continued: “They end up with performance issues, because of a matter of literally like, a process they can’t avoid unless they use synthetic hormones to shut down ovulation and to shut down their menstrual cycle. But they undergo a process of essentially bloodletting unintentionally because that’s just part of being a f—ing female where they lose a bunch of oxygen carrying capacity and performance whereas you don’t like this is there’s so many things that go overlooked in this conversation. That It’s like basic biology driven. ”

The PED expert went on to deconstruct the requirements the NCAA implemented compared to what Thomas admitted she takes in interviews:
“She satisfied all the regulations compete required to compete in the women’s category, she’s taking testosterone suppressants and estrogen supplements, so reduce her testosterone levels to average female levels and has done so for at least one year per the regulations. ”

But the guidelines seems way off base – because it allows for athletes that are transitioning to have 4 to 5 times more testosterone than a typical female has:
“So yet the regulations are 10 nanomoles per liter, which is about 288 nanograms per deciliter for one year. So that means for 12 months, you have to have the levels equivalent to that of a male or lower than a male. I know… that sounds… Did you miss hear me and No you didn’t, you need to have lower levels than 288. The reference range for a male is about 250 to 1000 depending on what lab you’re using, but a normal biological female will produce roughly 40 to 50 nanograms per deciliter of total test ”

“What is this representative of? Well, it’s about five times higher, six, seven times higher than that of a cisgender female. So despite the fact that this individual says you have to have average levels of a cisgender female levels, now you actually don’t the limitation is about 10 nanomoles per liter. And even if they impose the new stipulations that are being proposed, where you need to have 36 months underneath five nanomoles per liter, that is still only 144. Still pretty f—ing high, you’re still above polycystic ovarian syndrome territory testosterone levels – to a point where you could not explain this unless you have like, like internal gonads.”

“You are essentially telling these individuals you can take estrogen therapy to induce feminization, you know, grow breasts and do this and that, but you can maintain your testosterone levels to some extent, as long as you’re underneath here, you can still have lighting, self stimulation your ball sack, you can still you can still have an unfair advantage up to a point where you have six to seven times the androgen levels of a f—ing female, like this is vitalizing territory. This is male levels. This is like literally you wouldn’t even be clinically eligible for TRT at this point.”

As for Thomas, she revealed she had undergone 2 years of HRT and revealed exactly what she was taking though not the dosage.

Another significant point the expert debunked is the Michael Phelps comparison. Many of Lia Thomas’ sympathizers point to the advantages Michael Phelps had thanks to his stature compared to other male swimmers. Derek goes on to read out a trans talking point about Phelps:

“Let’s look at an example Michael Phelps winning us Olympian of all time, several biologic features that provide unique advantages in swimming torsos abnormally long, his legs short, wingspan four inches longer than his height, lung capacity is twice the average and his body produces half the levels of lactic acid the average athlete does when tested, Phelps was praised as genetically superior but when women athletes, especially women of color and or trans women exhibit biological diversity is called unfair. ”

And subsequently debunks it comparing it to the infamous Caster Semenya take:

“So this is a very interesting kind of like tangent, and it’s what we talked about with the Caster Semenya debacle and the individual individuals who are biologically female you know from birth but otherwise have like intersex characteristics and that is a bit more of a debatable discussion in my opinion.”

“But we have somebody who is blatantly male with blatantly normal physiologic function and this is not some sort of situation that is having a I don’t know like pseudo hermaphrodite ism or something you have an individual’s who’s like legitimately like a healthy functioning like high performing male and then they transition like this is not about you were born with some f—ing biological differentiation that made you be elite of your aside the identify gender that you are rather it is you are identified as male, and then you walk in transition like it’s, it’s a little bit different. In my opinion, biological differences can provide advantages, but it doesn’t mean does not mean they are unfair or grounds for disqualification.”