Jake Paul has announced that his upcoming August 6 pay-per-view card will be cancelled altogether. The main issue was his opponent, Hasim Rahman Jr has been reportedly having issues with his weight.

Paul’s promotion, MVP, has released a statement regarding the cancellation. In the statement, it was said that Rahman planned on weighing this Friday at 215 pounds, 15 pounds heavier than the original contract. While Paul’s team is willing to compromise a 5 pounds addition, Rahman’s camp said that they would withdraw if the bout was not at 215 pounds.

“MVP and Jake Paul will not reward someone that has conducted themselves in such a deceiving and calculated manner,” the statement read.

“Therefore, MVP is left with no choice but to cancel the August 6th event. This forced outcome impacts Jake Paul, Amanda Serrano and every other fighter on this card who have trained tirelessly over the past few months for this event. The boxing community must hold Hasim Rahman Jr. liable for his lack of professionalism.”

The bout between Paul and Rahman was signed earlier this month after Paul’s original opponent, Tommy Fury, pulled out due to a visa issue.

In the contract, Rahman agreed to box at 200 pounds. He also provided evidence that he wouldn’t be losing more than 10% of his weight between the signing and the bout.

In early July, Rahman weighed 216 pounds according to MVP’s record, and his team was confident that he will make weight on time.

However, it was later found that Rahman had lost less than one pound since signing for the bout. The NYSAC then declared that they would only sanction the fight at less than 205 pounds.

“Upon receiving this new contract Saturday morning, Rahman’s camp indicated for the very first time that he planned to weigh 215 lbs. at the official weigh-in and would not agree to weigh-in at 205 pounds and informing Most Valuable Promotions that they are pulling out of the fight unless the fight was agreed to at 215 pounds,” the statement read.

With the cancellation of the main event, the card ultimately lost its main selling power significantly despite having female boxing legend Amanda Serrano as the co-main event. The card was then cancelled altogether and the MVP stated that they will refund all the purchases.

Prior to the event, Paul’s team was adamant about the weight issue. 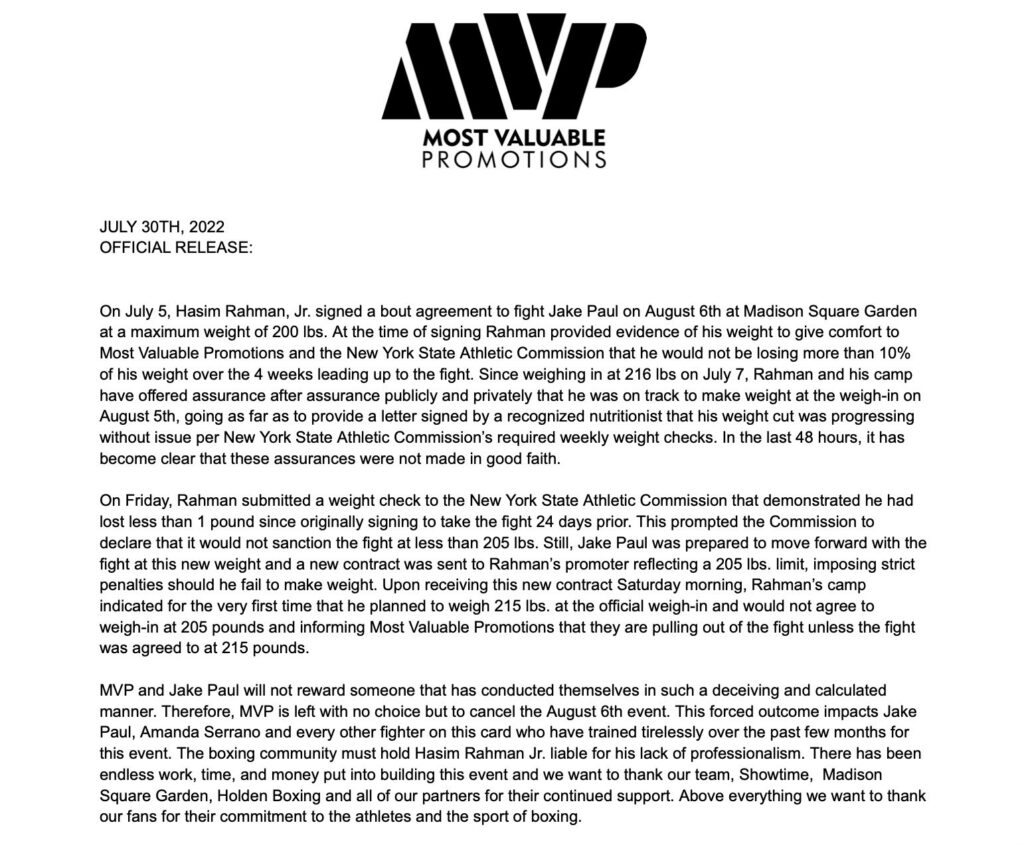 During an interview on The MMA Hour, Hasim described the stringent requirements. He told the presenter Ariel Helwani:

“I am being fined, after four ounces, every pound over I lose 25 per cent of my purse. They leave a lot of stuff out when you’re dealing with Jake Paul and his antics.”

“For example, if I came in at 202lb for the weigh in, and then 216lb for the rehydration weigh-in then I would get the minimum, which I think is $5,000. That’s because of two pounds they are that scared.”

“They want to put all that pressure on me to make the weight to say ‘you’re losing 25 per cent for every pound you’re over’, so if I come in 204lb, I get the bare minimum which is capped at $5,000. It’s a lot that goes into these fights.”