Following in the steps of the “Marshall Rogan Inu”($MRI) coin, another MMA-inspired cryptocurrency has been created.

“Free Cain token” is a cryptocurrency that is jumping on the bandwagon of the movement to support Cain Velasquez as he faces one of the biggest battles in his life.

Former UFC Heavyweight champion Cain Velasquez was arrested after shooting at an individual who was allegedly the abuser of one of his underage relatives.

Velasquez is facing attempted murder charges on top of the following charges: assault with a firearm, assault with a deadly weapon, shooting at a motor vehicle, and discharging a firearm from a vehicle with intent.

Following his arrest, fans and fighters all got together in a movement to support the former Heavyweight champion. His coach Javier Mendez even started a Gofundme page that was eventually taken down.

And as with everything, a Crypto token was founded and attached itself to the cause . “Marshall Rogan Inu” started a campaign to offer help to Velasquez legal costs during his trial earlier, however it’s unclear what if anything they donated to the cause.

And now, the new MMA cryptocurrency goes by the name of “Free Cain Token”.

Their website states that the coin exists as “part of a movement started by people who are against injustice”, and that  3% of all transactions go directly to the wallet assigned for Cain to help with his legal fees.

Although these cryptocurrencies seem to come from a genuine idea, it’s important to note that this is still just another crypto token with an anonymous team behind it and probably a desire to profit off of the social cause as well.

$mri has been heavily promoted in the MMA community. The coin has sponsored several MMA fighters, and public figures like Chael Sonnen became online poster boys for the currency. 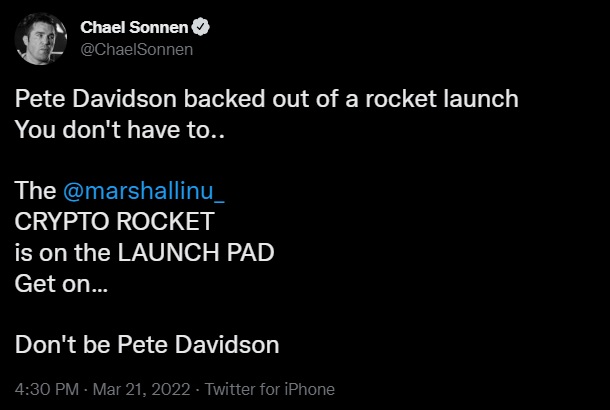