UFC veteran Diego Sanchez slammed Conor McGregor for the way he’s been behaving. Sanchez, 40, believes McGregor is setting a bad example for the up and comers.

I am fighting @DiegoSanchezUFC in Mexico, November 15th. He spoke a big game. Now he will pay with his career. VIVA LA EIRE!!!

Conor McGregor is a huge sports star who garners a lot of attention – in fact the popularity of McGregor in many ways eclipses that of the UFC. Especially considering that he’s the world’s richest athlete in 2021.

‘The Notorious’ broke the PPV record scoring the biggest number of PPV buys in 2018 against Khabib Nurmagomedov with a total of 2,400,000 PPV Buys. For those keeping score at home the PPV alone grossed $155,976,000 for the company.

In spite of previously wanting to fight McGregor on multiple occasions, Sanchez recently expressed some interesting opinions. The opinions are even more interesting when we consider that Sanchez is currently employed by Khabib Nurmagomedov’s Eagle FC.

He mentioned an event back in 2019 where McGregor punched an old man in a bar in Dublin, Ireland. The video of him punching the old man went viral. McGregor ultimately escaped scandal unscathed.

To Diego Sanchez…
I seen your recent comments about your final bout and I am in!
After you fought Pereira, I had requested for myself and you to compete in Dublin. This was back in February when I was working on opposition for my season, pre covid.
Good luck this weekend! pic.twitter.com/Y0hf6Zr7XF

Diego Sanchez is committed to improving the quality of the next generation by doing free seminars. The 40-year-old veteran hopes to become the right role model in the world of mixed martial arts. Speaking with MMA Junkie, Sanchez added:

“So I’m doing my best to do my part. And that’s why I do free seminars with kids. Anybody wanna fly me out to anywhere in America in the world, wherever, I’ll do a free seminar for the kids. Anywhere, anytime. I’ll go make that time to work with the youth of the next generation because they’re the ones that need the most because they’re the ones that are gonna keep us going and eventually be taking care of us.” Sanchez said. 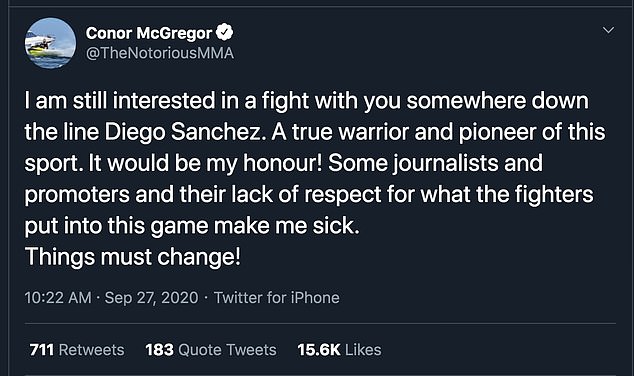 McGregor appeared to have been a fan of Sanchez for years, frequently tweeting about him. It’s unclear if this was an easy payday opportunity for McGregor or if he’s genuine.

Sanchez was unceremoniously released by UFC after 16 years back in 2021. He was sidelined from his final fight thanks to the unholy alliance with former coach, manager and ‘self awareness expert’ Joshua Fabia. He will be making his MMA return March 5th against Kevin Lee.