Conor McGregor has been keeping an eye on the UFC lightweight division despite expressing the desire to return to Welterweight.

This weekend is a big one for the division considering former interim champion Tony Ferguson is scheduled to face former Bellator champion Michael Chandler in addition to Charles Oliveira defending his belt against Justin Gaethje.

During the media day, Ferguson expressed his resentment toward the organization and how he was treated throughout his career. During the press conference he went on to say.

“I’m waiting for insurance. I’ve been competing in this sport a long time. I took a bad fall at FOX, they took my title from me. You know, I don’t even have to go into the Miller-Ayala Act where an agent is not supposed to be competing in the same sport as you…”

Miller-Ayala act is a piece of regulation that’s meant to regulate relations between professional athletes and their agents.

What many don’t realize is that Ferguson was managed by Paradigm Sports Management upto 2019.

Audie Attar is the founder and president of Paradigm Sports Management. He founded the company in 2009 – but his fortune wasn’t really made until he went into a partnership with star client Conor McGregor.

Audie Attar co-founded Eire Born Spirits along with Conor McGregor and Ken Austin. EBS was the parent company behind McGregor’s Proper No.12.

This is why Ferguson believes he was mismanaged. He previously expressed he felt McGregor and Paradigm owned him roughly $500,000.

While most of MMA media missed out on what Ferguson meant when he referenced the Miller-Ayala Act – McGregor understood perfectly fine which is why he responded in the following manner:

“Tony Ferguson, who changes representation around four times a year, is saying it’s someone [else’s] fault he is in the position he is in,” McGregor stated in a since deleted tweet. “How many bridges do you burn before you look yourself in the mirror and say, ‘Maybe it’s me that’s the issue’? God bless you, pal, I’ll say a prayer.”

McGregor previously addressed Ferguson signing with a different agency in the following manner:

Prior to Ferguson slamming McGregor/Auttar management, McGregor was complementary of Ferguson.

And as for the claim that McGregor had nothing to do with Paradigm Sports Management besides being a client here’s a tweet that basically refutes that. 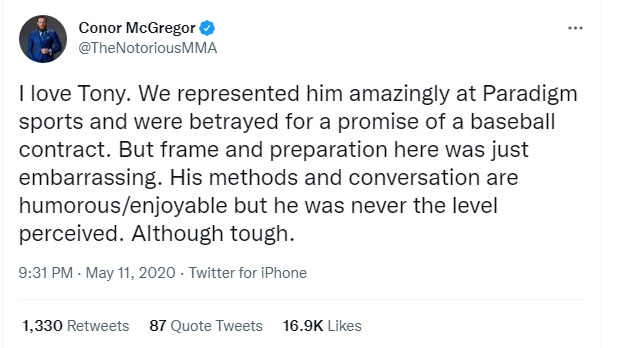