Jorge Masvidal has been recovering from the 5 round war he underwent against Colby Covington this past weekend. At UFC 272, the two went the full five rounds with Covington scoring a convincing decision victory. At one point Covington was given a stern warning for an eye poke – even though the poke went initially unnoticed.

Masvidal was quick to point out the repercussions of the poke on his social media. 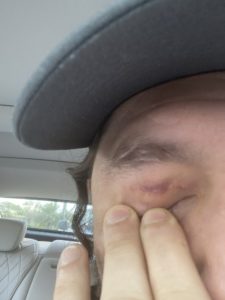 Covington fans were quick to slam Masvidal for the accusation.

Regardless of how the fans feel – the fact is that Herb Dean acknowledged the eye poke in the beginning of Round 2 and gave Colby a stern warning.

Masvidal criticized Dean for his approach after the fight saying:

“Me and Herb Dean don’t have a clean record as it is. You know, we have had a couple of mishaps in the past and he’s not my cup of tea when it comes to refereeing.”

“There was also a low blow as well. I don’t know. Colby has always been a dirty fighter but I’m not gonna rely on that,” said Masvidal during the presser.

Masvidal has been trying to spin this defeat – the 37 year old star changed his social media pictures to the picture of a strike that got Covington down. 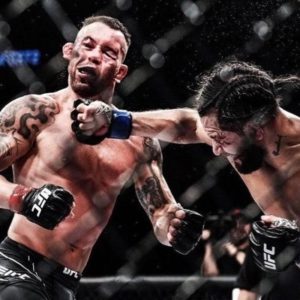 Convington was humorous in his take on the now infamous strike saying:

“I wasn’t dropped, I just took a knee for the first responders”. Colby told the media after the fight.