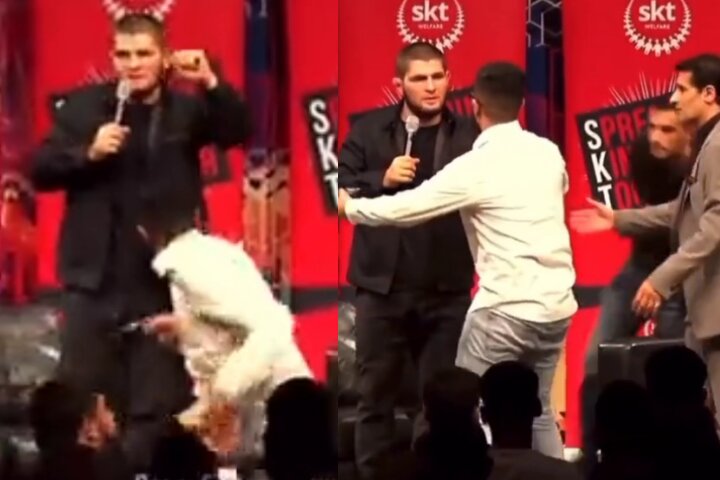 Khabib Nurmagomedov is one of the greatest champions in the UFC. The lightweight Champion made it to the top of the division among some very tough competitors, after all the division is probably the hardest on the entire roster.

But even though Nurmagomedov retired, seems he hasn’t lost his cool demeanor.  A while back, at a recent Q&A session in England a belligerent audience member suddenly charged the Dagestani champion while he was talking.

Guys, I come from other part of world here, to see you guys. And you know… I think I deserve some respect too, you know? Thank you.

I just want to say something. I feel like around the world (there is a) big support for my people, who have the same views I have. And I really believe that here everybody has the same views.
And please, take care of your kids. This is our future. And that’s important.

This year it was announced he would be inducted into the UFC Hall of Fame. The Russian ace has been  a good advocate for MMA but hasn’t shied away from his radical views from believing women have no place in MMA to standing up for former teammate Cain Velasquez who is in a world of legal issues thanks to taking up vigilantism to avenge the pain suffered by an underaged family member.

The Eagle’ retired from mixed martial arts in 2020 with a clean score of 29-0, having only lost two rounds in the UFC. The only thing preventing him from being crowned the greatest is because most of his opponents prior to the UFC were fairly low rated.

Khabib’s former manager Ali Abdelaziz recently claimed that the 33-year-old could take on Israel Adesanya easily if they ever compete in the octagon. Even now Khabib still trains daily, even though he’s not an active fighter. Nurmagomedov is also rumored to be walking around at around 200 lbs nowadays.

During a recent interview with Sherdog, Ali Abdelaziz compared Khabib’s performance to Israel Adesanya and is certain that Khabib could submit Adesanya at 185 pounds.

“I’m gonna say something, and I know a lot of people [are] gonna talk bad [about it]… Khabib now weighs 200 pounds. If Khabib comes tomorrow and cut to 185, he will stop Israel Adesanya in three rounds, this is my opinion. I see it. He beat heavyweights, light heavyweights, welterweights, lightweights. He’s unstoppable. He’s like a tractor trailer.”

Abdelaziz elaborated that Khabib has an advantage due to being a skilled grappler against a dominant striker like Adesanya. Adesanya’s wrestling is certainly one of his weaknesses. Thus far he was able to avoid good wrestlers thanks to a steady stream of calf kicks and spazzing out of the bottom position. His only loss comes from Jan Blachowicz who was able to control Adesanya for the 2nd half of the fight thanks to well timed takedowns and ground control.

“Styles, if Khabib wants to come back and talk with Dana White, say, ‘Let me fight at middleweight,’ he will finish Israel Adesanya in three rounds because of the style of fights. [Adesanya] cannot stop his wrestling, he cannot stop his grappling. Striking, of course, Israel is the best striker on this planet. But he (Khabib) can come back and fight at middleweight and become a champion today.” Abdelaziz added.