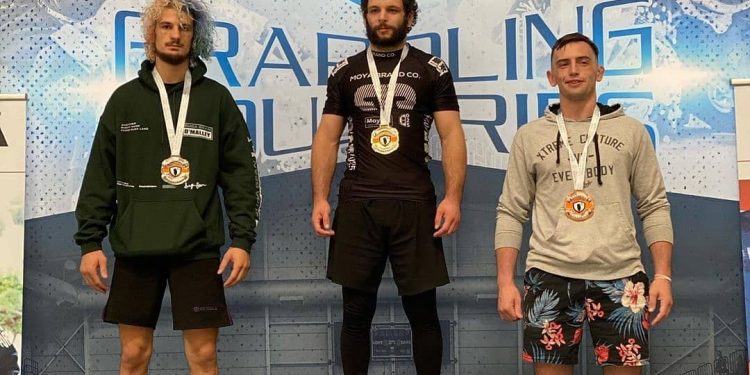 “Sugar” Sean O’Malley is seen competing against brown belt (he has since been promoted to black belt) Robert Degle in the -155lbs Advanced division.

Degle is a black belt under Brandon Bennett of the Renzo Gracie Academy.

He had a very successful run as a brown belt and happens to be one of BJJ’s most promising up-and-coming black belts.

In the video we see Degle doing quick work of the UFC bantamweight.

In around 30 seconds, Degle is able to pull guard and instantly get beneath O’Malley’s base.

From there Robert gets the UFC fighter in a 50/50 position, and in a matter of seconds, he secures the heel hook submission victory.

To give credit where credit is due, there’s no shame in losing a grappling match to a grappler of the caliber of Robert Degle.

O’Malley has been training for a longtime under ADCC medalist/former UFC fighter Augusto Tanquinho Mendes in Arizona. He is rumored to be a huge fan of the competition class at his academy.

O’Malley had also participated in a match to help out a bjj academy that runs a class for special needs kids in Arizona. He told montanasports;

“One of our buddy’s, Allan (Di Lucia), is his coach and owns the (Unlimited BJJ) gym and he has free classes for special needs kids,” O’Malley explained. “So he messaged me on Instagram and asked me if I wanted to compete against him and I was jacked. He said it would make his day, and I told him it would make mine, so doing stuff like that is just priceless, that’s where pure happiness is.”

“I wasn’t too familiar with what he was capable of doing, but his coach told me if he takes my back he can choke or he can do an armbar,” O’Malley said. “But it was a lot of fun and it was a good time.”

“After watching the video and seeing him get his hand raised, it was awesome. He was just super excited,” O’Malley said. “The cool thing is, he’d be happy doing anything whether it’s jiu-jitsu or anything else, he’s just a happy kid who we could learn a lot from.”

You might also care to know that O’Malley’s autographs cost an unbelievable amount of money!