Gilbert Burns just proved that the oddsmakers were on something fierce discounting his chances against Khamzat Chimaev.

Chimaev showed up ready and captivated the attention of the audience. Either of the athletes had many notable moments through out the 3 rounds that their bout at UFC 273 lasted. In the end the judges decided it in Chimaev’s favor in spite of some Burns edging him out on official stats.

The two even came close to exchanging blows in-between rounds. Round 1 ended with Chimaev mounted on Gilbert next to the fence – at this point Burns tried to push him off and Chimaev retaliated with a slap before the referee got in-between them.

As for what’s next – well Chimaev might have to rest and recover for once. There was a lot of talk about this decision victory being on the judges considering Burns had a bigger output than Chimaev. 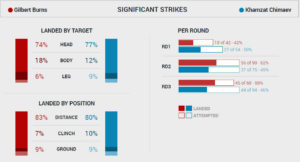 As per Dana White, Chimaev is likely looking at a Colby Covington match up.

“I think if Khamzat Chimaev wins this weekend, we see him and Colby Covington next.”
“So I have a fight coming up on ABC, and in a perfect world if everything turns out right, I would love to do Khamzat vs. Colby if Khamzat should win on Saturday night.”

Chimaev is a huge favorite coming into tonight despite Burns being a UFC veteran with a significantly better track record. 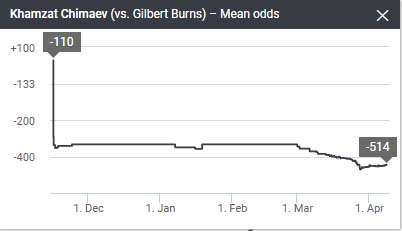 “It’s trending very well, man. This thing is trending to be big for us. It’s sort of one of sleeper fights. That came up out of nowhere and blew up. Like you said, everybody’s talking about anything you post online that has anything to do with Chimaev, and Burns is outperforming the main and the co-main event by six to seven times. And it is an interesting card.”