UFC Featherweight Ryan Hall has been invited to participate in the upcoming grappling tournament ADCC.

ADCC’s head organizer Mo Jassim also stated that Hall is interested in participating in the absolute division as well.

That got many fans excited because it meant that Hall might get a chance to clear the air in a match against Garry Tonon or Gordon Ryan. Tonon previously competed in the -77kg division while Ryan competed in both -88kg division and -99kg.

Hall has been involved in a lot of drama after stating that Tonon was “disrespectful” towards his student Thanh Le. Hall’s criticism came after Le knocked out Tonon.

After the fight, Hall went on social media to praise his fighter’s win, and at the same time criticize Tonon. Gordon criticized Hall’s lack of accomplishments as a grappler in return, while Garry Tonon straight out stated that he didn’t like Hall and criticized him for having never competed against him or one of his teammates.

Hall later apologized to Tonon for his unfortunate statement. During the same apology post, Hall criticized Gordon Ryan’s antics, which he described as “obnoxious”:

“Given the well-documented history of overtly as well as sideways obnoxious behavior that has come from Garry’s teammates towards me and many, many other individuals in the grappling community, I took an uncharitable view immediately. Case in point, the world’s current most successful grappler conducts himself like a jackass on the daily, acting like a petulant teenager who just happens to be a very dangerous and capable individual. Passing that along to Garry, though, was unfair. I was wrong to do so.”

One thing to keep in mind is that Hall will be competing at ADCC while maintaining his UFC employment.

That means that Hall will remain in the USADA’s testing pool. This is especially interesting considering the rampant PED abuse at ADCC.  Ryan reacted to Hall’s announcement:

“HAHAAHAHAHAHAHAHAHAHAHAHAAHAHHAHAHHAHHHHHHAHAHHHA. I hope to God he shows up so we can see how God awful he is. I’m not gonna say I told you so.. wait, yes I am.”

ADCC doesn’t have any anti-doping regulation, meaning that most of their athletes are “free” to use whatever they want for preparation for the grappling tournament. 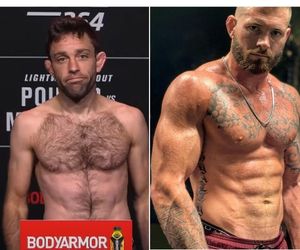 The event will be headlined by the anticipated super fight between Absolute Champion Gordon Ryan against the Superfight Champion Andre Galvao.