UFC fighter Ryan Hall found himself in the center of the drama following his comments about the victory of Thanh Le over Garry Tonon.

During the most recent ONE FC event, Tonon fought Thanh Le for the ONE FC Featherweight title.

Le prepared for this fight by training with leg lock expert Ryan Hall. Many speculated Hall’s leg lock expertise could play a crucial role during the fight prep.

Tonon was able to get the fight to the ground and start working on his trademark leg locking.  Le was able to maintain his base and posture and land hard ground and pound while Tonon was working from the bottom. Le kept cool and knocked out Tonon with a well placed strike.

Ryan Hall took to Instagram after the fight and slammed Tonon for being ‘disrespectful’:

“Thanh Le: respectful of his opponent’s great skill and confidence in his own abilities won over decades of training. Displays A+ submission defense on the way to an amazing performance over a tough opponent.

Other guy: Disrespectful and dismissive.”

The declaration quickly caused a stir in the bjj community and Hall had to defend his remarks. Hall explained he found Tonon’s intro package disrespectful:

“Garry stating that he is among the best grapplers in the world and has the ability to submit anyone is entirely justified. He’s relaying a fact there. Going to the equivalent of ‘thanh has nothing he can do on the ground and he’s been ill-prepared by the team with which he trains’ not a fair statement. Outcome this way or that is irrelevant” Hall wrote to explain his call out. 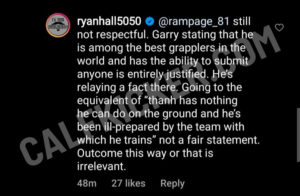 “Imagine being Ryan Hall (who has me blocked btw because he’s a sensitive p**sy with a test level of 80) – a dude who tricked the world into thinking he was actually not terrible at jiu-jitsu by beating up random clowns at NAGA and grapplers quest opens…” Gordon continues his rant.

“He’s a guy with no positional or submissions game of any kind, who did leg locks in a time when no one else did and his 2 biggest accomplishments in grappling are winning the trials and taking a bronze at ADCC by default (someone got injured).”

“He’s literally never won a single tournament of note,” The roast continues “and has since declined grappling matches with every single person on our team.”

“My name is Ryan Hall and I’ve literally never won a single tournament worth noting, ” Gordon writes. “My biggest accomplishments are convincing people who suck at grappling that I’m actually good at grappling, along with talking s**t and then decline matches”.

Tonon was clearly struck by this characterization – he went on to post several posts about it saying:

“Grapplers that talk s**t about other grapplers and won’t compete against them are no better than the fat guy on the couch talking s**t about how the quarterback should’ve done a better job on Monday night football.” Tonon says.

“The option to compete against me or any of my teammates has been on the table for years Ryan. Ever since you first felt the need to talk s–t about Eddie Cummings years ago when he had a razor-thin match in adcc.”

“I don’t like you. And you’re a hypocrite. You’re right about one thing, Thanh is a good guy. And he deserves to be the champ. You on the other hand should probably look at yourself in the mirror before calling the kettle black.”

“It’s a shame you had to make your “congratulations” to your teammate about your beef with me. Any interviews I gave while speaking about you leading up to this fight where I was extremely respectful, I deeply regret.”

“I knew you didn’t deserve it, should’ve just trusted my gut. If you ever want to crawl out from whatever rock you live under to fight and not just open your mouth I’ll be right here.”

Following all the drama, Ryan Hall issued an apology for his comments about Tonon.

“I would like to apologize to Garry Tonon.” Hall writes as he starts his apology. “When I made a post this morning congratulating @thanhlemma on his performance defending his @onechampionship belt, I did not set out with the intention of kicking a man when he’s down. That said, it was clearly taken that way by more than one person and I am sorry for it.”

“In supporting my friend, I may have read too much into a negative pre-fight assessment of Thanh’s Jiu-Jitsu. My goal was sticking up for a buddy, but in pursuit of that, I ended up doing exactly the type of thing that I would say I’m against.”

Then Hall explained why he felt disrespected by Tonon. According to him, Tonon stated that Thahn Le’s would be “ill-prepared” for the fight. And as a coach that didn’t sit well with Hall.

“From where I’m sitting, stating that an athlete of Thanh’s level is going to “be surprised at how ill-prepared actually he is” on the mat in spite of his training partners, coaches, and personal discipline is dismissive of both Thanh and the people around him. Still, Garry says that he did not intend it disrespectfully and, as a man, I have to take him at his word.”

And while Hall acknowledged he may have misinterpreted Tonon – he scolded Gordon Ryan for the way he responded:

“Given the well-documented history of overtly as well as sideways obnoxious behavior that has come from Garry’s teammates towards me and many, many other individuals in the grappling community, I took an uncharitable view immediately.”

“Case in point, the world’s current most successful grappler [referring to Gordon Ryan,] conducts himself like a jackass on the daily, acting like a petulant teenager who just happens to be a very dangerous and capable individual.”

“What I should have done is simply congratulate Thanh and leave it at that. Moving forward, that’s what I’ll stick to.”

Hall then says that he hopes he can get a chance to face Garry Tonon in the upcoming ADCC event.

“Hopefully we can meet up at ADCC 2022 to have an opportunity to address things in a sporting venue. Until then, I hope he heals up quickly and returns to doing fantastic things on the mat and in the ring soon.”

Hall was also questioned by a fan in the comments about the fact that he lost a fight in a similar fashion, which he disagreed with:

“Not quite. But I did get punched in the face a bunch for doing something stupid a couple fights ago”.