And here’s the complete list for all athletes featured on UFC 270 and prelims. 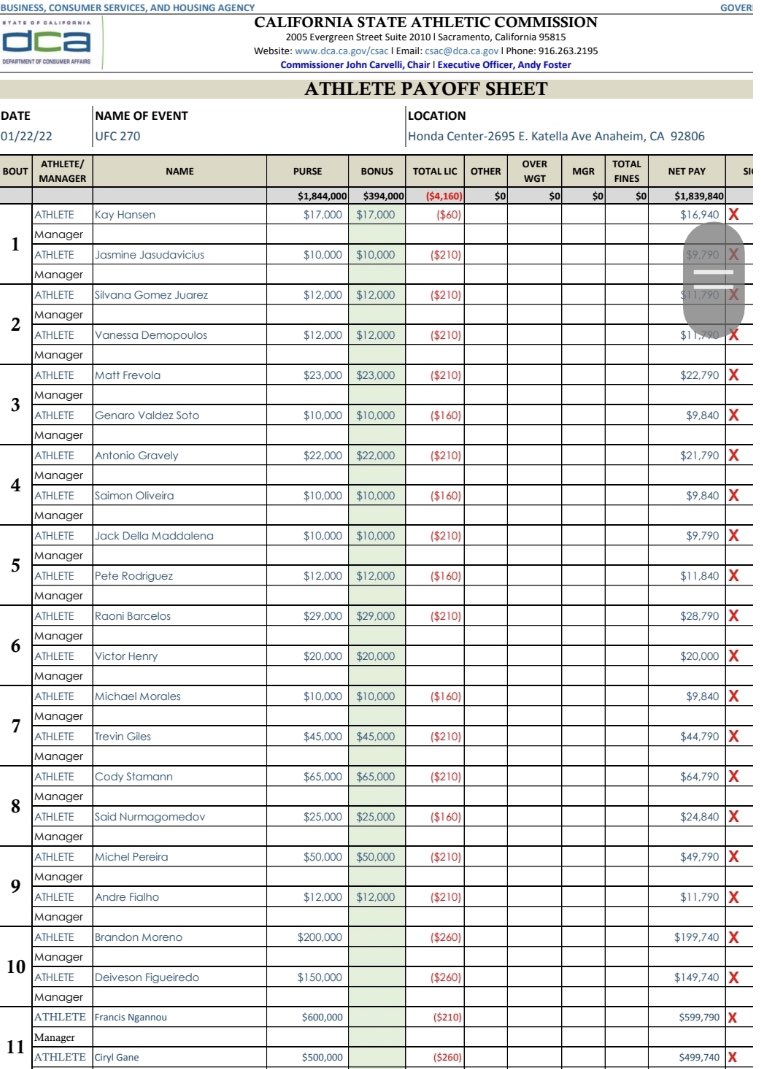 Keep in mind that California is one of those states with hefty income taxes!

This fight will be the last on Ngannou’s contract so he’s pushing hard to open up big payday opportunities.

Ngannou signed an eight-fight contract with the UFC back in 2017 after scoring a
terrifying knockout win against fAlistair Overeem.  Ngannou went 0-2 after signing the contract but then redeemed himself with a 5 fight win spree.

If the UFC uses the champions clause to auto extend his contract. This extension covers either three fights or one year.

Ngannou stated that without a new deal on hand, he would hold out on accepting any new fights.

He also stated that he would not fight under the current contract and looking forward to
renegotiating some terms on new contract.

The Cameroonian also added his desire to make a crossover to boxing while under the new contract with the UFC.

“We’ve been having discussions for years. It seems like they are OK with it. Let’s be honest, I do believe that whatever you are doing–whatever the event is–if the UFC is involved, it’s just going to make it bigger. There is no question. So, yes, if I box, I would like the UFC to be on board.”

The UFC seems to be irked by some of Ngannou’s terms. They failed to reach a new
deal in spite of multiple efforts.

But while White may claim this – he’s more of a figurehead as of late. The real power lies with UFC CFO Hunter Campbell .

Francis Ngannou is known for his devastating strikes and explosive knockouts. After
suffering back-to-back decision losses against Stipe Miocic and Derrick Lewis, he rode a
five-fight KO/TKO win streak to claim the UFC heavyweight championship in a rematch against
former foe Stipe Miocic. And he just defeated Cyril Gane after 5 rounds!