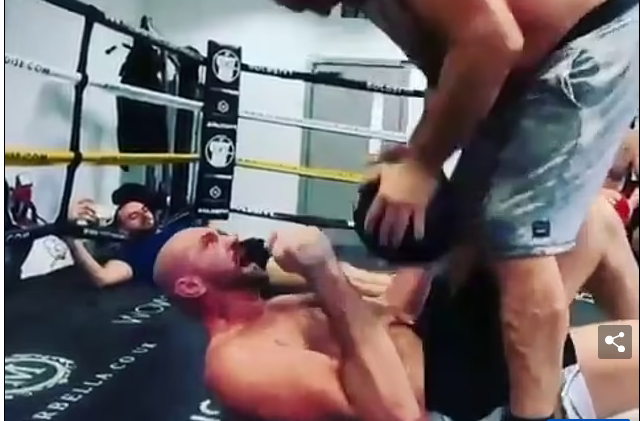 ‘The Gypsy King’ Tyson Fury recently uploaded a video on his Instagram account showing bizarre and brutal training featuring his father, John Fury. The WBC heavyweight champion is shown reveling in a body hardening session with a heavy medicine ball landing on his torso.

In that video, Fury is laying down on his back inside a boxing ring while his father is standing atop of him. His father is throwing down a medicine ball on his chest, belly, and flank multiple times. Fury also shouted to his father to pummel harder by saying “break a f***ing rib!”, “break one!”, and “I like it!”.

Tyson Fury added a caption saying “when you hit that Friday feeling, & someone trying to put a dampener on it.” on the video uploaded on his Instagram account.

A medicine ball, or exercise ball, or a med ball, is a solid weighted ball that weighs anywhere from 1-50 pounds. The one that is being used in that video is quite big, probably weighing around 30 to 50 pounds.

People are impressed and are assuming that this training is to enhance Tyson Fury’s body endurance to be able to take multiple hard shots during a boxing match. However, some people also find this way of training to be ridiculous.

Tyson Fury successfully defeated Deontay Wilder on October 9 and defended his WBC and The Ring magazine titles. So far, the 33-year-old boxer has fought 32 times in his professional career and never lost a single fight. He has a score of 31 wins and 1 draw.

Currently, Fury is also focusing on training his half-brother, Tommy Fury, who is scheduled to fight the Youtuber Jake Paul on December 18.